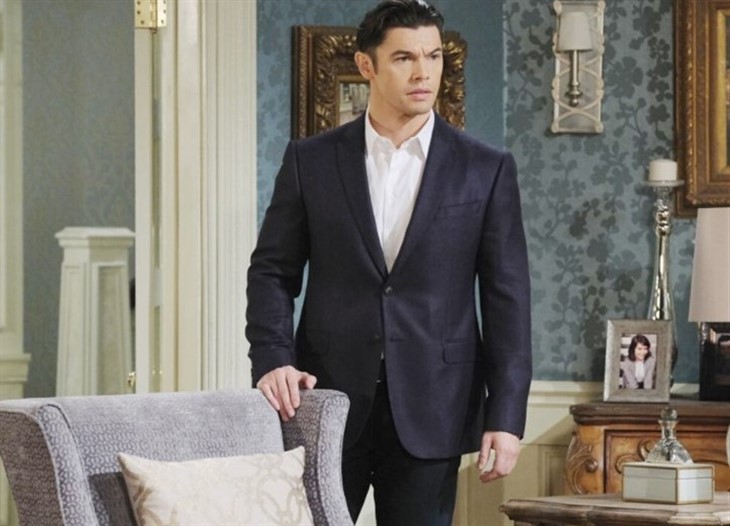 Days of Our Lives (DOOL) spoilers tease that Xander Kiriakis (Paul Telfer) will be livid as he makes a shocking announcement in an upcoming episode of Days of Our Lives!

Days of Our Lives viewers will remember that Gabi Hernandez (Camila Banus) first tried to win her company, Gabi Chic, back from DiMera Industries back by winning Jake DiMera (Brandon Barash) back. However, that didn’t work so well as Jake had moved on and is now deeply involved with Kate Roberts (Lauren Koslow).

According to DOOL recaps, Jake did consider her business proposal, however, and did give Gabi her company back. But without DiMera money behind it, it’s nothing but a storefront! The store hasn’t even been open since Chad DiMera (Billy Flynn) bought her out and then closed the store!

Days Of Our Lives (DOOL) Spoilers: Kate Wants Jake To Stop Vivian, But At What Cost?

So, Gabi decides on the next best – and most prosperous – thing, and she turns to Xander Kiriakis (Paul Telfer) to try and worm her way back into Titan – and what better way than try to worm her way into Xander’s bed! The only thing is, Gabi is extremely out of the loop of what’s happening in Salem and who is with whom. Gabi used to live in the Kiriakis mansion, but that has been a long time ago, and even then it was only because Will Horton (Chandler Massey) and Sonny Kiriakis (Freddie Smith) lived there too, and it facilitated them co-parenting her daughter with Will, Arianna Horton (Sydney Brower). Gabi never tried to “get together” with Xander then, but her eyes were on different prizes back in those days!

DOOL Spoilers & Updates – Gabi Hernandez Has No Idea That Xander Kiriakis Is Involved With Sarah Horton!

Strangely enough, Gabi has no idea that Xander is involved with Sarah Horton! But then, she was much too busy most of the time doing things like getting revenge for the death of her husband, Stefan DiMera (Brandon Barash). Days of Our Lives viewers will recall Gabi went as far as splitting up Lani Price Grant (Sal Stowers) and Eli Grant (Lamon Archey) and ruining their first wedding by having a controllable pacemaker implanted in Julie Williams (Susan Seaforth Hayes) and nearly killing her!

Days of Our Lives spoilers show Stefan’s heart had begrudgingly been donated to Julie by Gabi, but the vindictive, spiteful Gabi was determined to have the last laugh and even seduced Eli in his grief over Lani dumping him at the altar! There is nothing Gabi will not do including taking another woman’s man in order to get her way, and that is what she plans to do with Xander!

But Xander can “see her coming” a mile away and he will not bend. Victor Kiriakis (John Aniston) certainly doesn’t want her back in the house, let alone be part of his company through Gabi Chic! Luckily, Sarah is not home when Gabi tries her stunt with Xander, or she would find a much more formidable foe in Sarah than she would have ever expected! It would be a catfight royale!

Finally DOOL spoilers show Xander loses patience with Gabi, and he goes ballistic! Just as Sarah happens to come home and hear him, Xander makes the shocking (shocking to Gabi anyway) announcement that he wants nothing to do with her and is getting married to Sarah! Gabi will just have to find some other way to fund her company!

The Young And The Restless (Y&R) Spoilers: Jack Is A Grandpa – Sally Sabotaging Herself Again