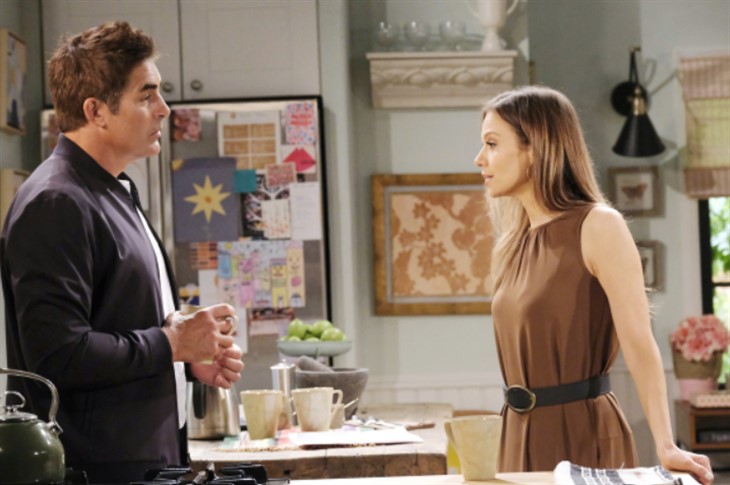 Days of Our Lives spoilers reveal that Rafe Hernandez (Galen Gering) finds a dead body in his kitchen. When the man is identified as Carmine Merlino (Richie Stevens), Ava Vitali (Tamara Braun) returns home and is questioned about the mobster’s murder. Even though Ava was going to take care of Carmine, could she actually be innocent?

DOOL spoilers reveal that Rafe discovers a dead body in his kitchen. Rafe is horrified but does the right thing by calling it in. Then he discovers who the body belongs to, which is Carmine. Rafe knows that is the name that Jake DiMera (Brandon Barash) gave him when explaining how Abe Carver (James Reynolds) got shot. Rafe also knows that Carmine is a mobster for the Vitali family.

When Ava comes home, Carmine’s body is being hauled away. Rafe knows that Jake and Gabi Hernandez (Camila Banus) are innocent as they have been at the police station. The only other person that could have done it – in Rafe’s mind – is Ava. After all, Ava has too many connections to Carmine and lives in the house where the body was found.

Days Of Our Lives Spoilers – Confiding in Eli Grant

Days of Our Lives spoilers reveal that the new issue of Soap Opera Digest confirms that Rafe is suspicious. The commissioner truly believes that Ava has killed someone. Rafe shares this with Eli Grant (Lamon Archey). It is confirmed that Ava is interrogated but it doesn’t appear as if she is arrested, though.

That same day, Nicole Walker (Arianne Zucker) calls Rafe with an emergency. When the two meet, they discuss everything that happened earlier. Rafe tells Nicole that he believes Ava is responsible for Carmine’s death. However, Nicole must know that Ava is innocent as she urges Rafe to go home to his girlfriend. In fact, Rafe uses Ava’s alleged crime as an excuse to sleep with Nicole. Galen seemed to indicate to SOD that the case really isn’t that simple, though.

Could Ava actually be innocent of murder and if so, who killed Carmine? A mobster like that probably has many enemies. However, it might be someone that fans wouldn’t ever expect – such as Sami DiMera (Alison Sweeney). Sami is due to return soon and it’s possible that Carmine wasn’t just guilty of shooting Abe, but might have kidnapped Sami as well.

Who do you think killed Carmine? Is it really as simple as Ava punishing the mobster for shooting Abe? Or could there be an unexpected twist to this story? We will have to keep watching the NBC soap to find out.

Be sure to catch up on everything happening with DOOL now. Come back often for Days of Our Lives spoilers, news and updates.

Days Of Our Lives Spoilers: Tripp And Allie Face Their Worst Nightmare