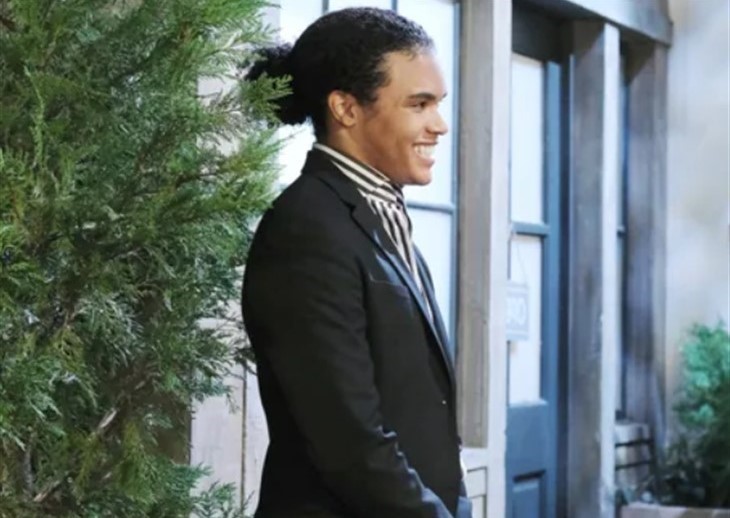 Days of Our Lives spoilers reveal that Theo Carver (Cameron Johnson) comes to Salem to celebrate Lani Price Grant’s (Sal Stowers) wedding anniversary. Ciara Brady (Victoria Konefal) also comes to town, but her focus is getting the divorce papers signed. It turns out they will have a third reason to reunite with family and friends. They have a huge announcement to make.

DOOL spoilers reveal that Ciara sent Ben Weston (Robert Scott Wilson) divorce papers shortly after she moved to South Africa with Theo. Even though it seemed pretty quick, Ciara and Ben didn’t have a fight or falling out. Ciara has no memory of the three years they were together. In her eyes, he is the serial killer that terrorized Salem.

Ben (and fans) were hoping that Ciara’s stay in South Africa would be a short one. Even though viewers like the character of Theo, the soap spent so much time and energy building up “CIN.” It wasn’t easy for fans to get on board due to Ben’s killer past.

It is confirmed that Theo arrives in town to attend Lani and Eli Grant’s (Lamon Archey) one-year anniversary. Of course, “Elani” will be thrilled to see Theo again and so will Abe Carver (James Reynolds). However, the celebration ends up being a chaotic event. It is teased that part of it has to do with Paulina Price’s (Jackée Harry) lies regarding Horton Town Square. The other part of it is Eli and Chanel Dupree (Precious Way) arranging a special surprise for Lani. Unfortunately, she thinks something much shadier is going on.

While Theo and Ciara are in Salem, they will stop by to visit Doug Williams (Bill Hayes) and Julie Williams (Susan Seaforth Hayes). The couple has a special announcement to make. Although some wonder if Ciara is pregnant, we are thinking that the two are engaged. A baby wouldn’t make Ciara desperate to get divorced immediately. She can have a baby whether she’s married to another man or not. However, Ciara can’t marry Theo if she’s still legally bound to Ben.

Days Of Our Lives Spoilers – Family And Friends Divided

Days of Our Lives spoilers reveal that during the week of July 5, fans will react to Theo and Ciara’s news. Of course, some will be excited for the couple. Others won’t know how to react because if Ciara gets her memories back, that could mean Theo is left with a broken heart. We can’t forget the ones that are rooting for “CIN,” though.

We know Shawn Brady (Brandon Beemer) puts his foot down with Ciara’s cruel treatment of Ben. Claire Brady (Isabel Durant) also has something to say about it. As for Marlena Evans, (Deidre Hall), her heart will ache for Ben. At the same time, she will support whatever decision Ciara makes about her love life.

Head writer Ron Carlivati previously told Soap Opera Digest that something will happen that will leave ‘CIN” fans on the edge of their seats. Then, there will be a two-week break due to the Olympics airing on NBC. When the soap returns, we will find out what Ben does as a last resort and how Ciara responds.

The scribe promised that “CIN” fans will get the payoff they didn’t receive during Ciara’s last appearance. So, that indicates Ben and Ciara get back together. It is also hinted that she doesn’t necessarily ever remember her romance with Ben. However, what does happen is Ben tries to create a new love story and make Ciara fall in love with him all over again. So, we will have to keep watching the NBC soap to see how that happens.