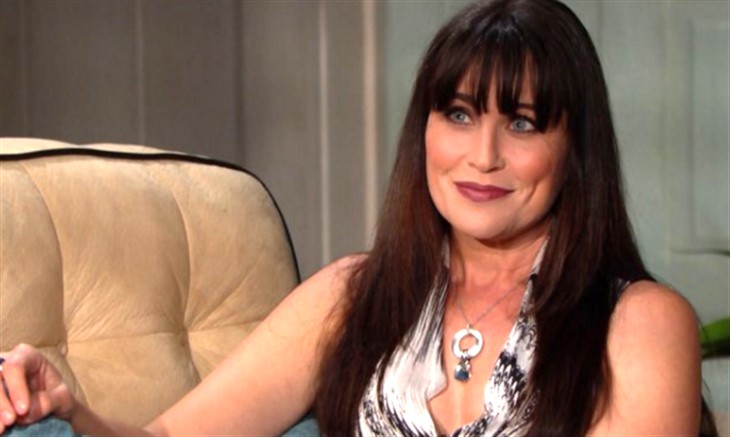 CBS The Bold and the Beautiful spoilers recap for Wednesday, September 9, reveal that Quinn Forrester (Rena Sofer) and Shauna Forrester (Denise Richards) talked at Flo Fulton’s (Katrina Bowden) apartment. Shauna and Quinn talked about how Shauna was moving into the Forrester mansion, and they reflected on their modest backgrounds. Shauna felt very lucky, but she also felt guilty about how her wedding to Ridge Forrester (Thorsten Kaye) happened.

After some rehashing of how the whole marriage was built on a lie and a secret, Quinn insisted that Shauna put all that out of her mind. Quinn said that Shauna was the best thing that ever happened to Ridge and that Shauna should relish where she was rather than feeling bad about how she got there. Shauna worried that Eric Forrester (John McCook) and Brooke Logan (Katherine Kelly Lang) might find out their big secret.

In the Forrester Creations CEO office, Ridge and Zoe Buckingham (Kiara Barnes) met as Zoe modeled a gown that needed some tweaks. Ridge said that he was glad that Zoe was talking to Carter Walton (Lawrence Saint-Victor) after everything that happened with Thomas Forrester (Matthew Atkinson) earlier this year. Soon, Katie Logan (Heather Tom) came in, and Zoe took off.

Ridge wondered how Katie was doing, but Katie was all business. Ridge forced Katie to stop and he asked how she was holding up with everything that had been going on. Katie said that she was just trying to live her life and throw herself into work, and she lamented a bit about Bill Spencer (Don Diamont) and Brooke’s betrayal.

Katie then questioned Ridge’s marriage to Shauna, and she wondered if Ridge was happy. Katie noted that the only man that Brooke wanted was Ridge, but Ridge grumped about how Brooke couldn’t be loyal to him. Katie thought that perhaps Shauna’s appeal was that she was willing to commit to Ridge, yet she thought that Brooke is the one who truly does love, Ridge.

Katie acknowledged that Brooke gets into trouble and doesn’t think things through, but Katie also noted that Ridge may not have thought it through when he went to Vegas and married Shauna. “Do you really want Shauna?” Katie asked. “Are you going to honor a drunken marriage that you don’t even remember?”

At the Forrester mansion, Brooke talked with Eric. Eric said that he asked Brooke to come by so he could tell her to not give up on her relationship with Ridge. Brooke lamented about how Ridge ran off to Vegas and got married, and about how Ridge overheard what she said to Bill. Eric encouraged Brooke to focus on the future and the love she has for Ridge.

The Bold And The Beautiful Spoilers – Eric Forrester Left The Room

After Eric left the room, Ridge walked in the front door and saw Brooke standing there. Brooke shared that she was there because Eric wanted to see her, and Ridge shared that he spoke to Katie and that she supported them. As Brooke and Ridge continued to talk, Quinn walked out onto the balcony above and spied them talking. Quinn then hid and continued to listen to Brooke and Ridge’s conversation.

Brooke went on about how Quinn and Shauna came between them, and Quinn rolled her eyes as she listened. Brooke thought it was interesting that Ridge didn’t remember one thing about the night he married Shauna. Ridge said he drank a lot, but Brooke thought there was more to it than that. Brooke said that Ridge being with Shauna was wrong and that they needed to overcome this.

Ridge listened as Brooke outstretched her hand and said that Ridge should come home with her. Horrified, Quinn got on the phone and called someone, telling them to get over to her place immediately.

That was a terrific episode of B&B, and there’s plenty more coming tomorrow, so stay tuned! We’ll be sure to give you updates as more B&B news comes in. Stick with the CBS soap and don’t forget to check SOS frequently for the latest Bold and the Beautiful recaps, spoilers, and news.