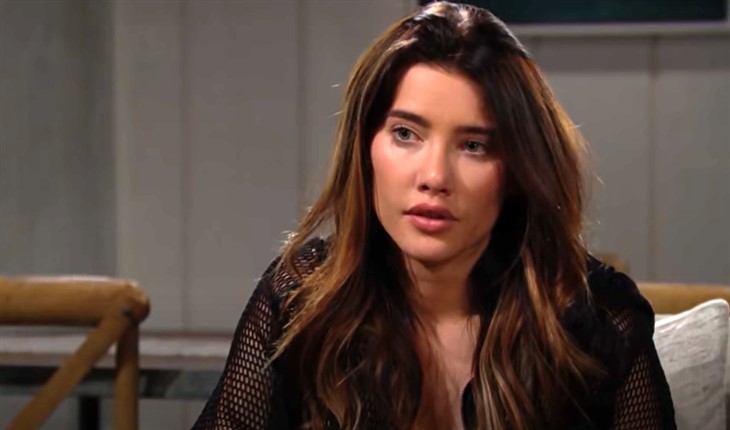 Liam said that he thought that he’d have heard from Hope or Steffy about the drop-off, but that he hadn’t heard anything. The men talked a bit about Steffy and how she’s used to being in control, yet bad things keep happening to her. Bill pointed out that it could be causing tension since Steffy was expecting Liam to drop Kelly off and not Hope. Liam said that Hope and Steffy put aside their differences a while ago and that they both wanted what was best for the kids.

The Bold And The Beautiful Spoilers – At The Cliff House

Meanwhile, at the cliff house, Steffy apologized for unloading on Hope, and she explained that she had just been excited to see Kelly. Hope apologized, too, yet she thought that Steffy’s reaction seemed like more than just frustration. “Are you really all right?” Hope asked. Hope said she was concerned, and Steffy asked if that’s why Hope was keeping Kelly from her.

Steffy was telling Hope that she’d ask for help when she needed it, just as John “Finn” Finnegan (Tanner Novlan) walked in. Hope and Finn met, and Hope expressed her concerns about how Steffy was doing to Finn. Hope and Steffy bickered a little in front of Finn, and Hope said that it was important for Steffy’s doctor to know what’s really going on. Steffy fired back that if there was something Finn need to know, then he’d hear it from her.

Hope apologized if she overstepped, and she promised to be back soon with Kelly. Hope left, and Finn asked if Steffy wanted to know what was going on. Steffy said that she shouldn’t have lost her temper and that Hope was only trying to help. Finn said that stress wasn’t good for Steffy’s recovery, and he asked if there was something he should know.

At Spencer Publications, Liam and Bill talked alone. Bill asked what was going on with Steffy, and Liam said that he didn’t think Steffy was doing as well as she wanted everyone to think. Liam said that he just wasn’t in sync with Steffy like he used to be, and Bill said that was to be expected. Bill and Liam pondered everything that Steffy has lost recently, and how she’s isolated at the cliff house.

Bill said that while Hope, Liam, and the kids were having a fantastic time at the cabin, Steffy was all alone and that perhaps Liam was feeling guilty about that. Bill didn’t think that Liam should feel guilty about that, but that it would be a natural feeling. Bill thought that Steffy and Kelly were probably having a great time right now and that Liam should stop beating himself up.

The Bold And The Beautiful Spoilers – Steffy Forrester Needs Her Daughter

At the cliff house, Steffy noted that she doesn’t like being without her daughter, and Finn quickly realized that the other woman in Liam’s life was Hope. Steffy explained that Hope and Liam were married and had a little girl of their own. Steffy pivoted the conversation to her pain and asked for another pain med refill, and Finn said that the pain meds were something they should definitely discuss. Steffy said the meds made her feel better.

That was a great way to round out the week, and there’s plenty more B&B drama coming next week. You won’t want to miss any of the action, so stay tuned to the CBS soap. Keep up with CDL over the weekend as well, and we’ll keep you current on the latest Bold and the Beautiful spoilers, news, and updates.