General Hospital Spoilers and Rumors: Monica’s Life In Danger After Being Chloroformed By Julian? 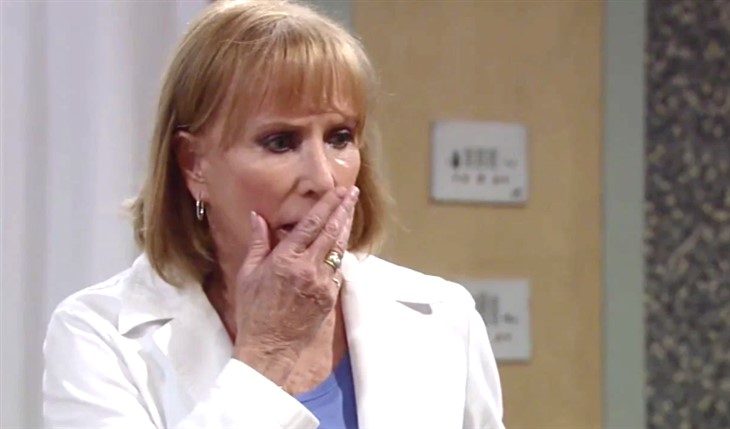 ABC General Hospital spoilers reveal that Julian Jerome (William DeVry) gets the drop on Monica Quartermaine (Leslie Charleson) after she is left alone to care for baby Wiley. She is all by herself in the mansion, and as a grandma she is tops, but as a bodyguard, not so much.

We know that Nelle Benson (Chloe Lanier) is on a mission to take her son and run. She’s so desperate she has a tracking device in the baby’s teddy bear, which, since he isn’t driving yet, seems pretty useless. But Nelle is crazy like a fox and no one should underestimate her.

What happens after Wiley is kidnapped on Monica’s watch?

General Hospital Spoilers – Monica Quartermaine Was In Over Her Head

Is Monica to blame for Nelle pulling off the kidnapping coup of the century? Nelle was able to convince Julian Jerome (William deVry) to do her bidding and kidnap her infant son as he slept in his room. Julian was able to do this after holding a wet rag to Monica’s face, presumably one soaked with chloroform. Chloroform can have serious side effects and this means Monica’s health could be in jeopardy.

Explosive show spoilers reveal that something awful happens on Monday and because of the parties involved, it could be Monica who is found in a dire and frightening condition.

According to a show preview, Willow Tait (Katelyn MacMullen) will make a horrifying discovery to kick off the week in Port Charles. It is likely that she will come looking for the baby and find out that Nelle has had him snatched him away from his real family. And she will inevitably find Monica passed out—or worse.

If this is the case, has Monica paid the price for trying to protect her great-grandson? We have no doubt that she would have fought tooth and nail against Nelle if it came to that. But Nelle sent a henchman, one armed with a toxic weapon.

Is Monica about to leave the canvas? It looks like she is in danger after being left alone to protect a baby from his lunatic mom and she may be the ultimate victim. That’s because chloroform can have a toxic effect on the lungs and kidneys and let’s face it, Monica isn’t moving around too well these days!

Will Monica be in for some serious rehab or worse, will her life be in danger?