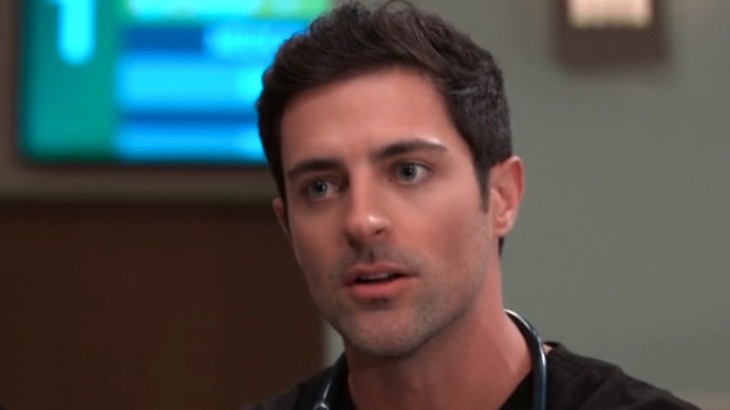 General Hospital (GH) spoilers tease that in Port Charles, NY it’s been an extremely difficult year for Lucas Jones (Matt Trudeau). He started out 2020 in a coma and believe it or not, things didn’t get any better once he woke up. His husband, Brad Cooper (Perry Shen) had been lying to him for over a year about the baby they had adopted. That baby had died, and Brad had worked with Nelle Benson (Chloe Lanier) to switch babies so that Lucas and the rest of Port Charles had no idea that they were really taking care of Michael Corinthos’ (Chad Duell) baby, Wiley Corinthos (Erik and Theo Olsen).

Brad ended up going to jail once the truth came out, and Lucas filed for divorce. Lucas spent the rest of the year working as many shifts as he could at General Hospital to the point of exhaustion. Friends like Felix DuBois (Marc Samuel) and Liz Webber (Rebecca Herbst) tried to talk to Lucas about taking care of himself, but Lucas would hear none of it. To make matters worse, Lucas is about to find out his father was behind the explosion at the Floating Rib. Julian Jerome (William DeVry) had helped Brad keep the baby switch a secret, and was indebted to Cyrus Renault (Jeff Kober) who helped him keep his secret.

GH Spoilers – Lucas Jones Will Have A Lot To Process

Once he finds out that Julian not only helped Brad but is now likely dead, will probably push Lucas further down into despair. But Christmas is coming, so look for Felix to try to bring Lucas out of his funk in time for the holiday. Lucas and Felix were once a couple, but Lucas ended up with Brad. That obviously didn’t work out but Felix still considers Lucas to be a good friend. And that’s what Lucas needs right now whether he realizes it right now. Perhaps Felix will get Lucas to help out a Food Kitchen or something like that to help give back for holiday. Anything to take Lucas out of his doldrums even if it’s just for a moment.

Lucas has pretty much stayed away from Wiley since Michael took him back. But Michael may realize that Lucas was the little boy’s father for the first year or so of his life, and it would do them good to spend time together. There is no doubt that Lucas loves the little boy and perhaps seeing Wiley will be the impetus Lucas needs to begin to heal from his terrible year.

Can Felix and Michael help Lucas feel better after his terrible year? How will Lucas feel once he finds out about Julian? Will he mourn for his father or remain numb to it all? Love always wins out in the end in Port Charles so stay tuned to General Hospital airing weekdays on ABC? And don’t forget to check back right here for all your General Hospital news, information, and spoilers!

The Bold And The Beautiful Spoilers: Hope’s Revenge Affair, Beds Finn After ‘Steam’ Secret Comes Out?