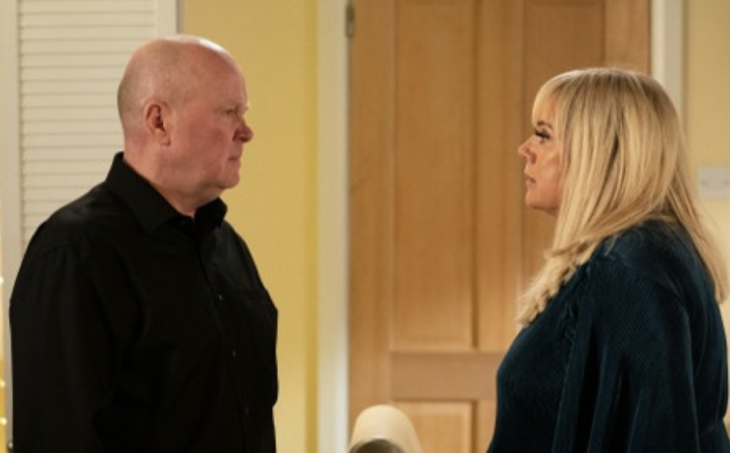 Eastenders spoilers reveal that Phil Mitchell (Steve McFadden) and Sharon Watts (Letitia Dean) will have some intense scenes. But then, it will end on a cliffhanger and the conclusion might not be aired until September. Keep reading to get the details, as well as possible outcomes to this storyline.

Phil thought that he was getting Sharon back and he wouldn’t have to worry about her baby, who was created due to an affair with Keanu Taylor (Danny Walters). However, Linda Carter (Kellie Bright) was absolutely correct when she told Phil that a mother will always choose her child.

Sharon tried pleading with Phil to accept the three of them as a family, but he isn’t interested. He kicked her to the curb again. Then, he added insult to injury by calling the baby “that thing” and saying Sharon was responsible for her son’s death.

Sharon Watts’ Takes Matters In Her Own Hands

Eastenders spoilers reveal that Linda is disgusted by Phil and how he is treating Sharon. She wants to not hand over The Vic to him. However, Mick Carter (Danny Dyer) believes it might be too late to back out of the sale.

It is also teased that Sharon ends up taking matters into her own hands. We are interested in finding out exactly what she does and how it could impact the future of her character, as well as Phil.

Phil and Sharon’s story is supposed to have an explosive conclusion. However, we will get a cliffhanger and could be forced to wait a bit before seeing the end of that storyline. This is due to the soap taking a break until they resume production.

It is one soap that will force viewers to wait to find out what happens next. Meanwhile, Coronation Street and Emmerdale all returned to filming this week.

According to the Sun, the BBC soap is planning on getting back to filming by the end of June. However, there is no word on when new episodes could make it to our TV screens. Remember, there is more to filming than just shooting scenes and putting it on the air. There is a lot of work that is done behind closed doors after filming wraps to make it ready to broadcast.

The publication estimated that we might not see Eastenders again until September.

TLC ’90 Day Fiancé: The Other Way’ Spoilers: Will Kenny Be Able To Leave His Family & Move To Mexico?