Young and the Restless Spoilers: Sharon Has To Make a Difficult Decision, Will She Reveal The Truth? 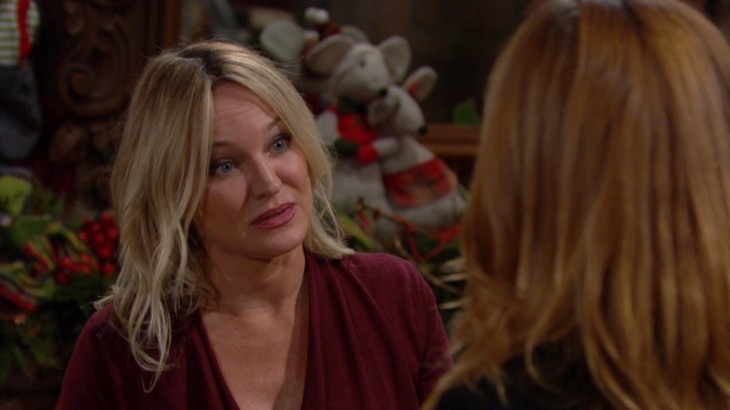 The Young and the Restless (Y&R) spoilers tease that Sharon (Sharon Case) will make a difficult decision during the week of December 31. It sounds like she will be forced to come clean about something. If it is difficult for her to admit, it could only mean one thing—it has to be able the JT Hellstrom (Thad Luckinbill) murder mystery.

As a way to make it up to Mariah Copeland (Camryn Grimes), Tessa Porter (Cait Fairbanks) could offer a [fake] confession to JT’s murder. Of course, if that happens, Sharon, Nikki (Melody Thomas Scott), Phyllis (Gina Tognoni), and Victoria (Amelia Heinle) will all know the confession is not true. However, they may allow her to take the fall if it means Nikki escapes the possibility of a prison sentence.

Sharon may not like this idea. She doesn’t trust Tessa, but that doesn’t mean she would support the women forcing Tessa to take the fall for Nikki’s crime. Sharon will have to decide if she wants to stand up to Nikki and Victoria or stay quiet and allow Tessa to go to jail for a crime she did not commit.

People comparing Sharon/Tessa to Nikki/Sharon isa desperate reach!
Tessa isa plotpoint – a means to a journey for Mariah & nothing more & definitely not #Shick
Plus, Sharon has class👌👌👌#YR pic.twitter.com/WTbT6KLRkk

Young and The Restless Spoilers Another Person Will Come Forward

Tessa’s confession may land her a spot in the Genoa City county jail, but it won’t last long. According to the spoilers for the week of January 7, an unlikely person will come forward and confess to killing JT. The real question is, who will step up and take the blame?

It sounds like there is some deep drama headed to the CBS soap opera over the next few weeks. Don’t forget to come back later for more Young and the Restless (Y&R) spoilers, news, and casting updates!

General Hospital Spoilers: Who Will Willow Choose Michael Or Chase?