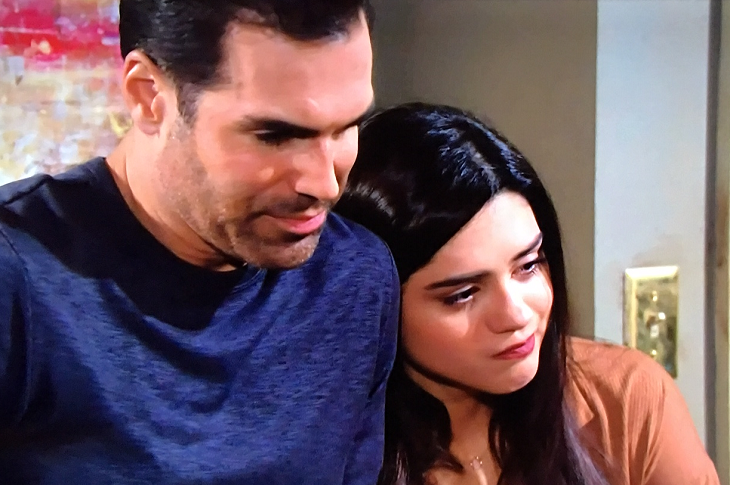 “The Young and the Restless” (YR) recap for Friday, April 12, 2019, reveals that over at Rey Rosales’ (Jordi Vilasuso) place, Lola Rosales (Sasha Calle) burns her food while flashing to being with Kyle Abbott (Michael Mealor). Rey enters and she announces she almost slept with Kyle – a married man – and it was her idea. Rey learns Kyle stopped it before it could go too far.

She expands that they really talked and still love each other. Y&R’s Rey feels Kyle and Summer Newman (Hunter King) made their choices but realizes Lola wants him back. Lola won’t sneak around like Mia Rosales (Noemi Gonzalez) and Arturo Rosales (Jason Canela). She says Kyle is telling Summer everything right now, then sighs that she’s a home-wrecker. Rey can’t understand Kyle marrying Summer for a liver transplant and why would she trap the guy?

Lola explains that Summer expected Kyle to see the truth. Rey talks about his marriage then adds Mia subconsciously wanted to be with Arturo. Lola soothes that by trying, he showed he was a decent guy. Rey regrets the wasted time and says he’s now with the right person. He tells Lola if Kyle’s the one, it will be worth it. Talk turns to Mia’s pregnancy and the paternity. Lola knows Rey will care about the child regardless and feels it’s their turn to be happy now. 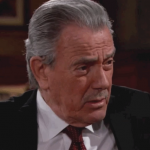 Young And The Restless Spoilers – Kyle Abbott Lies About His Whereabouts

At the Abbott mansion, Kyle lies to Summer that he was at work for a while then went for a walk. Summer suggests they celebrate her coming to work at Jabot. Kyle jumps up and says, “Champagne it is.” Summer takes him up to the bedroom. After, Jack Abbott (Peter Bergman) opens the door to Phyllis Summers (Gina Tognoni) and tells her Summer and Kyle are upstairs.

Phyllis informs him his son is a sleazy cheater and pulls out the photos of Kyle and Lola. Jack asks why she’s showing them to him. Phyllis exclaims that’s the million-dollar question. Upstairs, Summer’s got Kyle partly undressed but he pulls away from her kiss. Downstairs, Phyllis asks if Jack is okay with what Kyle’s doing to Summer and warns how another scandal would affect Jabot right now. Jack realizes she’s there to make threats. Phyllis thinks the son repeating the sins with the father would play in the press.

Jack asks what she’s after. Phyllis declares that the price of her silence is Fenmore’s. She also needs seed money. Jack marvels that she’s using her daughter. Phyllis snaps at him that life is unfair and she’s a bitch. Jack snarls that she lost, but Phyllis wants the money tomorrow or she and Summer unleash hell on what’s left of Jabot.

After she leaves, Jack texts Kyle to come down. Jack brings Kyle up to speed. He protests that it’s not what Phyllis thinks, but he and Lola love each other. Jack warns they don’t need this bad press. Kyle admits he thought Summer just wanted to win – it wasn’t about him at all, but she’s changed, and they do have a connection. He planned to tell Summer everything but she’s not as tough as she looks and he doesn’t know how to tell her he can’t be her answer.

Jack advises him not to drag this out and make a decision – he’ll buy him time by giving Phyllis what she wants. Kyle advises his father to tell Phyllis to go to hell. He rejoins Summer upstairs and she guesses he slept with Lola.

Kyle relays that it didn’t go that far, and says he hates hurting her. Summer believes they have something special and can push past this and she knows he’s not over Lola but forgives him and won’t stop loving him. Kyle spoons Summer as she goes to sleep and thinks.

At the Athletic Club, Y&R’s Lauren Fenmore Baldwin (Tracey E. Bregman) tells Michael Baldwin (Christian LeBlanc) about her call with Phyllis Summers, who is confident Jack Abbott will sell her back Fenmore’s. Michael’s worried about what Phyllis is up to. It’s late, and Lauren thinks they should go, but Michael reveals he greased some palms to get alone time with his wife. They slow dance, flirt, and kiss.

Later, Phyllis appears and assures the pair she knows what she’s doing and will keep them posted. She heads up to her suite and Jack arrives – there’s no deal and Kyle is breaking things off with Summer. Phyllis decides she’ll spin it a different way, but Jack smirks that she gambled and lost. Phyllis orders him out and smashes a mirror.

Downstairs, Michael takes a client call and Jack joins Lauren to inform her Phyllis’ plan went down in flames. Lauren will still fight to protect Fenmore’s. Jack promises to take their companies to new heights – she doesn’t need Phyllis; they’re a great team. Lauren’s thrilled with Jack’s plan and they hug. Upstairs, Phyllis looks at herself in the broken mirror and seems emotionally exhausted. And that’s a wrap. Don’t forget to check often with Soap Opera Spy for all your Soap needs!

MUST WATCH ‘General Hospital’ Preview Video Friday, April 15: Michael Worries About Shiloh, Jason Has A Plan To Take Him Down