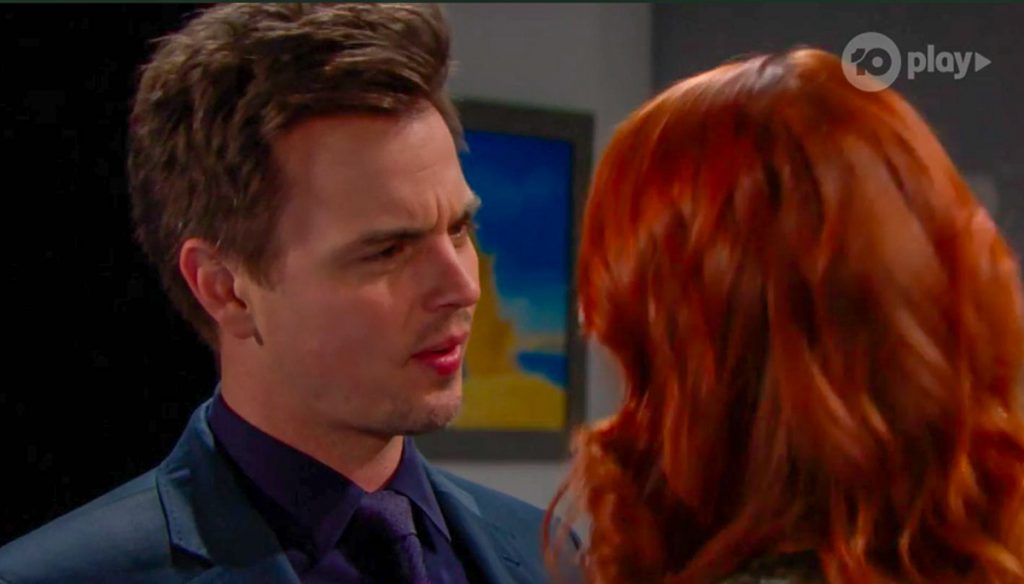 The Bold and the Beautiful spoilers for Monday, December 2, tease that Sally Spectra (Courtney Hope) will make a huge blunder. As B&B viewers know, Sally and Wyatt Spencer (Darin Brooks) really haven’t planned their wedding yet, and in fact Sally doesn’t even have a ring at this point. To make things even more complicated, Wyatt seemed to be seriously conflicted after Florence “Flo” Fulton (Katrina Bowden) donated her kidney to save Katie Logan (Heather Tom).

As B&B viewers know, Wyatt really loved Flo but turned his back on her after her lies and deceit regarding Beth Spencer (River Davidson and Madeline Valdez) came to light. Then he impulsively proposed marriage to Sally but it’s never been really clear whether his heart has been in it.

Well, on Monday’s episode of B&B, Sally is going to make a big slip of the tongue that may give Wyatt even more pause about his engagement to her. They will be talking about their engagement and Sally will mention that she hasn’t been pushing too hard to plan the wedding because that’s an unattractive look for a woman. Wyatt will then say that Sally could never be unattractive.

Sally will then kiss Wyatt and blurt out, “Well, then, are we doing this or not, Liam?” She’ll have called Wyatt by his brother Liam Spencer’s (Scott Clifton) name, and it looks like Wyatt will be pretty shocked by that. As B&B viewers will remember, Sally and Liam had a period of attraction toward each other and they even shared a kiss at one point.

The whole thing is really going to give Wyatt food for thought. Sally will probably feel pretty silly about the whole thing, but Wyatt might not take it too lightly. We have to remember that Wyatt has been struggling with his feelings for Flo also, and this could give him the out he needs to end the engagement. We’ll see how he actually responds.

The Bold and the Beautiful Spoilers: Sally Proposes A Quick Elopement To Wyatt

Meanwhile, Shauna Fulton (Denise Richards) and Ridge Forrester (Thorsten Kaye) will continue their kiss. They’re in the middle of a big conversation at the Forrester mansion and Ridge has just leaned in for a smooch. But Shauna will have a big surprise for Ridge. She’ll declare that she’s in love with him, and that will probably leave Ridge speechless.

Of course, B&B viewers know that Shauna has been infatuated with Ridge since she first came to Los Angeles, but lately the two have gotten close and Shauna has been a source of great comfort and support to Ridge. Of course, Shauna will probably make it clear to Ridge that she doesn’t expect him to reciprocate the feelings – after all, Shauna knows that he’s raw about breaking up with Brooke Forrester (Katherine Kelly Lang).

Still, it should be a touching scene, and it appears that Ridge and Shauna will share anther kiss, since B&B spoilers indicate that Quinn Forrester (Rena Sofer) will soon catch them in an intimate moment. Quinn will later want to hear all the details from Shauna about what’s going on and where things stand between them.

Finally, on Monday’s new episode of B&B, Liam will be welcomed back to Spencer Publications with open arms. It looks like Bill Spencer (Don Diamont) will have some special people gathered for Liam’s big return to the family company. Bill, Wyatt, Justin Barber (Aaron D. Spears), and Billy’s city hall connection Emmy (Sheryl Underwood) will all be there for Liam.

Of course, B&B viewers know that returning to Spencer Publications is a big step for Liam. He and Bill suffered some serious estrangement for well over a year, thanks go Bill’s affair with Steffy Forrester (Jacqueline MacInnes Wood) and all of his lies and manipulation to keep the pair apart. But now their father/son relationship is back on track.

Bill will even get a bit sentimental, as B&B spoilers say that Bill will show his softer side as he welcomes Liam back to the fold. Bill will surely be thrilled that both of his sons are back at Spencer, and he may vow to support and encourage them going forward. At any rate, B&B viewers would expect some nice family scenes.

Days of Our Lives Spoilers: Lani Reunites With Eli In Italy – Will She Tell Him The Truth About Gabi?