The Bold and the Beautiful Spoilers: Katrina Bowden Returns Home after a High-Flying Hiatus Down Under

Katrina Bowden is back at The Bold and the Beautiful after an action-packed stint Down Under. According to a glamorous Instagram photo of Bowden wearing a sexy gown, she returned to the set to check in on her “mom”, presumably her character Flo’s mother, Shauna Fulton. While Bowden took a six-week break from the show, Flo has been lying low as she recovers from a kidney transplant. Flo’s convalescence opened the door for Shauna to stay in Quinn Forrester’s guest house and put the moves on Ridge Forrester. 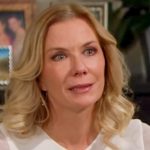 Bowden traveled to Queensland, Australia, to film Great White, a shark thriller that was inspired by true events and will release in 2021. The actress plays a seaplane operator who fights for survival on a terrifying trip to Hell’s Reef. In real life, while in Australia, Bowden was jumping out of an airplane, conquering her fear of heights by skydiving. Bowden took to social media to encourage fans to find the things that make them the happiest at their cores and “pursue them relentlessly even when [they] feel uncomfortable.” Bowden has also been busy acting in other films, including the horror move, The Orchard, with Thomas Jane, set to release in 2020. She’s slated to appear in the mixed martial arts film, Mickey Kelley, alongside Dennis Quaid and Sean Patrick Flanery. Bowden herself enjoys kickboxing and martial arts and is a proponent of a healthy lifestyle through her blog, FitKatbyKatrinaBowden.com. The actress is such a hardcore enthusiast that she once broke her leg during the New York City marathon and miraculously finished the race.

Bowden has had so many short-term side projects that The Bold and the Beautiful was only supposed to be a one- to two-month contract. However, she’s turned it into a year of front burner storylines, including becoming an integral part of the Logan clan, pretending to be Phoebe Forrester/Beth Spencer’s birth mother, landing in jail for her part in Dr. Buckingham’s scheme to steal a baby from Flo’s cousin Hope, and redeeming herself by donating a kidney to her aunt Katie Logan.

During her soap tenure, she’s developed special relationships with a few ladies connected with the show. Bowden is close friends with Kelly Kruger, who played Mac on The Young and the Restless and is married to Darin Brooks, who plays Wyatt Spencer on The Bold and the Beautiful. According to CBS Soaps in Depth, Bowden also loves her scenes with her onscreen mom, the “iconic” Denise Richards, who is “down-to earth and normal and cool.” Fans can look forward to more loving scenes between the mother and daughter as they continue to seek forgiveness and acceptance from the Logan clan.

Bowden fans can also expect some not-so-loving scenes between Flo and Sally Spectra. Wyatt, who still has deep feelings for Flo, his high school sweetheart, recently said he was only “cautiously engaged” to Sally and is still reeling from Sally calling Wyatt by his brother’s name. Flo’s return to the Bikini Bar and Wyatt’s tiff with Sally likely mean that Flo’s love life is looking up.

Connie Kuykendall is an attorney, CurledCrusader on social media, and author of the Southern romantic comedies, Love Ain’t No Soap Opera and Love Ain’t No Reality Show.

Days of Our Lives Spoilers: Rafe Finds Princess Gina In The Secret Lair