“General Hospital” spoilers for Wednesday, March 20, tease that Alex Devane Marick (Finola Hughes) will continue to stall on sharing which memories are hers. Anna Devane (Finola Hughes) is getting fed up with her sister – and rightly so! Alex needs to just come out with it already so she can get the blindness cure she needs.

Fortunately, Alex will divulge enough to secure the surgery on Wednesday. However, she won’t share everything. Despite Anna’s promise, “General Hospital” spoilers say she’ll betray her twin by handing her over to the WSB. To be fair, Alex isn’t keeping her promise either. She’ll keep one crucial memory to herself, but she’ll give Anna a hint and suggest she can figure it out on her own.

It seems likely that clue will lead to a major Peter August (Wes Ramsey) discovery before long. In the meantime, Harrison Chase (Josh Swickard) will have a suggestion for Willow Tait (Katelyn MacMullen). He’ll wonder how she’d feel about going away for the weekend together, so she’ll probably get on board.

General Hospital Spoilers – Will Willow Panic When She Sees Shiloh?

Sadly, Chase’s plan may go awry thanks to Shiloh Archer (Coby Ryan McLaughlin). Willow was once part of Dawn of Day, so she’s bound to bump into Shiloh eventually. Will Wednesday be the day? “General Hospital” spoilers say Willow will go into panic mode, so it just might be! 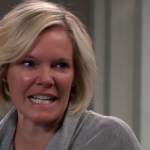 General Hospital Spoilers: Ava’s Revenge – Search For Ryan Is On!

Until then, Kristina Corinthos-Davis (Lexi Ainsworth) will pledge her loyalty to Shiloh. He’ll be pleased when she’s ready to take the next step, which may involve getting that creepy tattoo. Over with Sam McCall (Kelly Monaco), she’ll tell Jason Morgan (Steve Burton) that things are getting worse. Sam will feel like they have to get a grip on the Shiloh situation before it’s too late.

Next, Robert Scorpio (Tristan Rogers) will go looking for Sonny Corinthos (Maurice Benard). There’s a good chance he’ll only find bad news at first, but Robert may keep digging. In the meantime, Dante Falconeri (Dominic Zamprogna) will pretend to shoot and kill Sonny. He’ll fool the guard and contend that he simply did what he had to do.

Other GH spoilers say Carly Corinthos (Laura Wright) will be on the hot seat. Olivia Falconeri (Lisa LoCicero) will grill her about Sonny, but she won’t get much info. Thanks to Carly’s secretive behavior, Olivia will realize Sonny took off without telling anyone besides his wife. She’ll just hope that both Sonny and Dante can make it home alive.

Thankfully, Olivia will get her wish! Dante and Sonny will indeed fight their way back to Port Charles as soon as possible. We’ll give you updates as other details and rumors emerge. Stick with ABC’s GH and don’t forget to check Soap Opera Spy often for the latest “General Hospital” spoilers, rumors, updates and news.