General Hospital spoilers tease that Sasha Gilmore (Sofia Mattsson) will give Valentin Cassadine (James Patrick Stuart) a warning; but will she turn the tables on him and tell Nina Reeves (Michelle Stafford) everything?

She has become more and more hesitant about the possibility of hurting Nina and breaking her heart, but will she really go through with her threats to Valentin to tell her everything? She’s told him before that she’ll keep playing Nina’s daughter, but it would be on her terms, not his!

Valentin isn’t wild about being leveraged. He has enough problems with Liesl Obrecht (Kathleen Gati) knowing that he rigged the DNA test (at least one of them) by collecting DNA off of Madeline Reeves’ (Donna Mills) body and then some of Nina’s so the DNA would show close female relation. 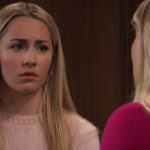 General Hospital Rumors: Will Joss And Carly Be Pregnant At The Same Time?

Other General Hospital spoilers tease there still could be close female relation to Nina, just not as her daughter, but possibly a cousin or even a younger sister she never knew about, although that possibility is extremely unlikely; surely Nathan West (Ryan Paevey) would have known if Madeline was pregnant at the same time as Nina was and would have mentioned it at some point!

Of course, GH writers have rewritten history twice already just in the last few months, with having had Kevin Collins and Ryan Chamberlain (both Jon Lindstrom) switching before instead of after Carly Corinthos (Laura Wright) was broken out of Ferncliff, and changed Sonny Corinthos (Maurice Benard) to the killer of Margaux Dawson’s (Elizabeth Hendrickson) father instead of just burying the body!

It wouldn’t be surprising if they rewrote history again and had Maxie Jones (Kirsten Storms) remembering something Nathan said about Madeline having had a miscarriage at close to the same time as Nina, and that baby have been a daughter who turned out to be Sasha!

General Hospital Spoilers – The Truth Catches Up To Valentin

Down-the-road General Hospital spoilers still tease that the truth catches up with Valentin: but which truth? Will it be the truth about Sasha, or the truth about something else? Valentin has a lot of secrets; he may even find out that when he followed Anna Devane (Finola Hughes) to where she had Cesar Faison’s (Anders Hove) baby, who grew up to be Peter August (Wes Ramsey) isn’t Anna’s at all, but her twin sister Alex’s!

That would be an adjustment for Peter as well! Stay tuned to GH and keep watching General Hospital spoilers frequently to see what happens with all the mysterious storylines currently in play!

Bold and the Beautiful Rumor: Hope Grows Close to Thomas, Wants to Play Mother to Douglas?