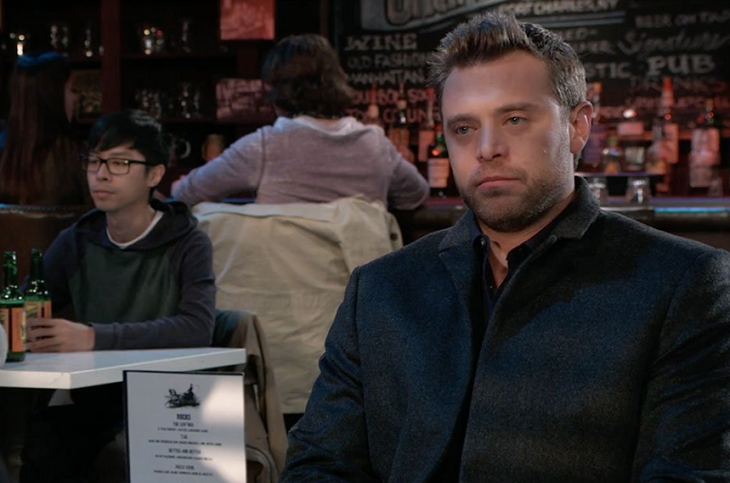 General Hospital spoilers tease that Drew Cain (Billy Miller) will soon receive a secret message, likely a text to his cell phone; but from who? It is quite likely that this will be an anonymous text from Shiloh Archer (Coby Ryan McLaughlin) trying to get him to meet him somewhere.

DA Margaux Dawson, (Elizabeth Hendrickson) who has been attending Dawn of Day seminars, recently spilled her guts to Shiloh while the two were having a drink. She told him she felt guilty about betraying a friend, by hanging on to information to get her friend to do something for her. Then she divulged it was the friend’s memories on a flash drive.

This by itself was not really so indiscreet, had Shiloh not heard about the flash drive and the memories from Drew earlier. If Shiloh didn’t already know, he wouldn’t have been able to figure out it was Drew that Margaux was talking about.

It’s possible Shiloh may have Harmony (Inga Cadranel) contact Drew, so it won’t be so obvious. Drew would become suspicious if he were to find out he was going to a meeting with Shiloh via a secret message.

Shiloh is obviously concerned Drew might remember something incriminating. He won’t want to take any chances Drew will ever be able to remember it, either through the flash drive and memory restoration procedure.

Shiloh’s father, Henry Archer, was obviously not in Afghanistan when he had the deadly accident, and Kim Nero (Tamar Braun) didn’t know Shiloh. So Drew probably didn’t witness Shiloh cutting the brake lines on his dad’s car or anything like that.

General Hospital – Shiloh May Have Been Working For Helena

What else could it be that Shiloh doesn’t want Drew to remember? Other General Hospital spoilers have tease Shiloh may not have been a contractor but a mercenary. Maybe he worked for Helena Cassadine (Constance Towers) when the Cassadines took over Dr. Andre Maddox’s (Anthony Montgomery) memory mapping project.

Was it Shiloh who kidnapped Drew and delivered him to her? Stay tuned to GH and keep checking General Hospital spoilers frequently to see all the latest news and developments in Port Charles.