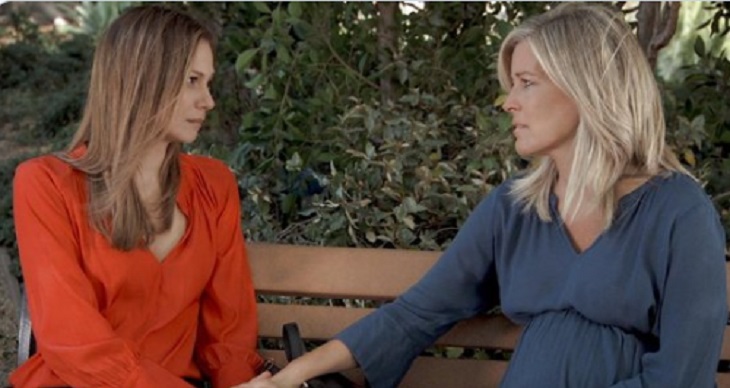 Welcome to your Monday August 5th General Hospital (GH) recap! We begin our day in the park where Carly Corinthos (Laura Wright) is caressing her belly and talking to her unborn baby. Kim Nero (Tamara Braun) approaches and asks her how the baby is doing.

At General Hospital (GH), Brad Cooper (Parry Shen) has brought baby Wiley to visit with his dad Lucas Spencer (Ryan Carnes). Julian Jerome (William DeVry) walks in and says hi as they hand Wiley over to him.

At Alexis Davis’s (Nancy Lee Grahn) house she is headed out the door and when she opens it Dr Neil Byrne (Joe Flanigan) is on her porch.

At General Hospital (GH) Hamilton Finn (Michael Easton) approaches Epiphany Johnson (Sonya Eddy) and asks her for a medical question favor. He asks if she can check a file on a prescription for a Dr Arthur Cabbot.

Outside Kelly’s Diner, Jason Morgan (Steve Burton) answers his cell and its Shiloh Archer (Coby Ryan McLaughlin). Shiloh says he’s holding Sam McCall (Kelly Monaco) hostage and he better do exactly what he tells him to do. At Shiloh’s hotel room, we see Sam tied up and passed out on the floor. He asks Jason to meet him at the hotel.

Jason shows up at the hotel and Shiloh takes his gun from him. As Jason enters the room he grabs Shiloh by the neck and we see that Sam is tied up under a bunch of garbage at the DOD house.

Neil comes over and says how it was very inappropriate for him to overshare about his daughter and her suicide. Neil says he needs to stop treating her and that’s its unethical.

Epiphany says he knows that he is a criminal and wonders what he is up to. Finn runs into Drew Cain (Billy Miller) and tells him about seeing Dr Cabbott at the hospital.

Carly tells Kim that the baby has spina bifida and they are not sure what happens next. Kim says she has delivered babies with spina bifida and she can call her anytime with questions. The two ladies walk through the park and discuss Oscar and Josslyn.

Carly tells Kim to take it slowly and grieve for however long she needs to. The discuss the pain of losing children and that the pain will never go away.

Liesl Obrecht 0Kathleen Gati) overhears Brad talking to Wiley about his swim lessons. She makes a joke that she’s lucky she knows how to swim since her shove overboard. Brad asks what she is doing at General Hospital (GH) and she says it’s a follow up from her accident. She tells Bard that she knows it is him who pusher her off the haunted Star.

Brad says that he did not do it and Liesl says he needs to fess up to what he did. Liesl says she knows the truth about Wiley, he is not Brad’s son.

At the Dawn of Day house, Lucas Spencer (Ryan Carnes) and his father Julian meet up with Lucy Coe (Lynn Herring) who is the real estate agent for the house. She says to not let what happened with Dawn of Day effect a possible purchase.

Kim says she does not have anybody in Port Charles who cares for her. She says not having Oscar or a child, is a hard truth to deal with.

Lucas wonders if the house is the right fit for just Julian and Kim. Julian says he may want to have his own baby.

Finn tells Drew that Cabbott picked up a serum that is tied to the memory mapping procedures. Jason yells at Shiloh about where Sam is? We flash to her tied up in a trunk with all the trash at the DOD house. Shiloh tells Jason his memory mapping plan is the only way to save Sam.

Kim runs into Drew and tells him that she has decided to leave Port Charles, Julian overhears. Liesl tells Brad she knows that Wiley is Nelle Benson’s son and that’s why he tried to kill her. She says she feels guilty about carrying the secret around. Brad threatens to tell the authorities that Britt knows the secret as well. Carly sees them shaking hands and wonders secretly what is going on.

Days of Our Lives Linsey Godfrey Talks Eric And Sarah, Lovemaking And Going In with Guns Blazing