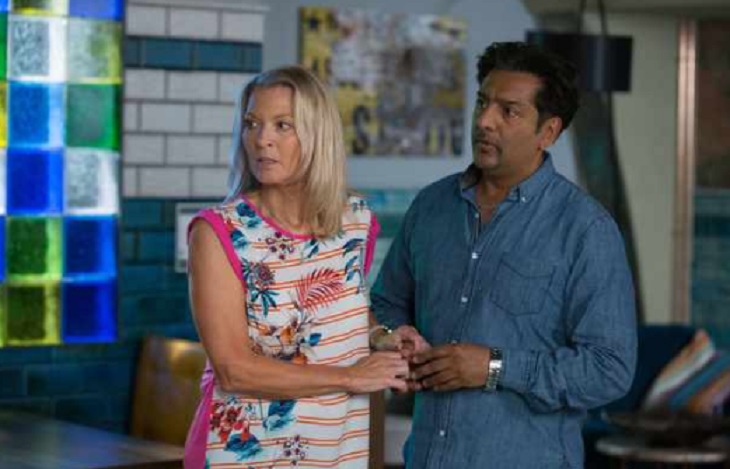 Kathy Beale returns to the Square with a shocking news for her son, Ian. EastEnders spoilers reveal that when she arrives in town, she goes directly to Masood Ahmed. She tells him she wants to give their romance a proper chance, and seals it with a kiss in the public and in front of Ian.

The first time Kathy and Masood tried to be together, Ian get in the way and broke them apart. Now that Kathy and Masood are a couple again, Ian is obviously not pleased. Will he cause another trouble for the couple? Spoilers say Kathy and Masood won’t let Ian’s disapproval hinder their relationship, telling Ian that they are an item now.

Well, since Masood is leaving Walford soon, there’s a huge possibility that he and Kathy will break up again. His exit storyline remains a secret, so viewers can only speculate what’s in store. Spoilers suggest that he might as Kathy to come with him. He is going to Australia to attend his son Tamwar’s wedding to Nancy Carter. EastEnders also teases some twists and turns to expect before Masood leaves the Square.

In Walford, someone always seems to be digging up the past… #EastEnders pic.twitter.com/5Ytgm3S8to

Meanwhile, fans are pleasantly surprised with the youthful appearance of Gillian Taylforth, who portrays Kathy. They say she looks fit and 10 years younger. One fan even suggested she had a surgery, “I want the number for Kathy’s surgeon, she looks amazing.”

Nitin Ganatra, on one hand, is leaving to explore new adventures although he said he is still attached to his character. He returned to EastEnders at the end of 2017. “When I was asked to return to EastEnders, it was always with the intention of helping set up new Asian characters that continue the Masood family adventures,” he told Digital Spy. “With Arshad and Mariam at the helm and with the arrival of the feisty sister Iqra and Habiba, I can now venture off to new horizons as an actor.”