Days Of Our Lives Spoilers & Recap Wednesday, May 15: Tripp Learns The Truth And Dumps Claire – Haley To Be Deported Immediately 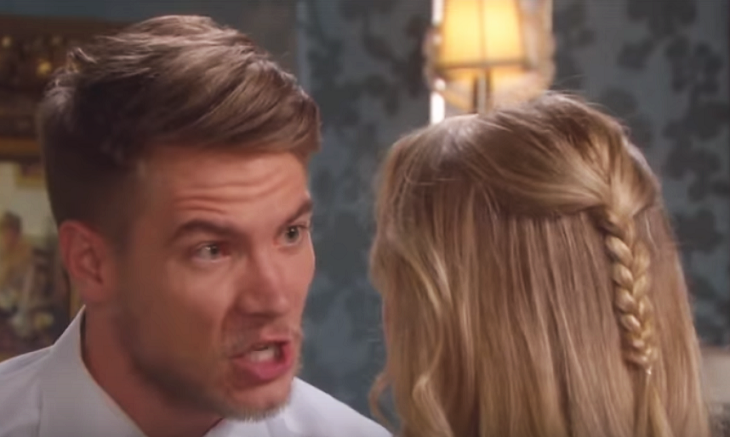 Meanwhile, J.J. Deveraux (Casey Moss) and Tripp Dalton (Lucas Adams) meet in the park and Tripp learns that Eve Deveraux (Kassie DePaiva) forced Haley into confessing. J.J. tells Tripp that Eve used a recording about their marriage to blackmail Haley. Tripp figures out that Claire taped him and tells J.J. he has to go. Claire is lying on the couch and dreams that Tripp comes and takes her home with him. He arrives and demands to know what Claire is thinking about that makes her so happy.

Claire asks why Tripp isn’t with Haley at the police station. She questions why Haley would confess, Tripp, brings up the recording. Claire pretends to be upset, Tripp doesn’t believe her. Tripp tells Claire that Eve had help from her. Tripp demands honesty and asks if Claire provided the recording. Claire tells Tripp she wouldn’t do that because she doesn’t want him to get into trouble. She says Eve must have wanted to keep her hands clean. Claire can’t believe that Tripp would believe this from her. Tripp tells Claire he knows how upset she was. Tripp finds it hard to believe that two of their private conversations had found their way to Eve.

Claire mentions that the conversation happened in the hallway. Claire finally admits to giving the recording to Eve. Tripp tells Claire she has ruined Haley’s life. She claims to have done this for them. Claire says she saved Tripp the trouble because Haley isn’t his problem anymore. Claire wants Tripp to take her home. Tripp tells Claire they are over forever. Tripp thought Claire was a good person but she isn’t. He gets a message from Justin and walks out telling Claire he can’t stand the sight of her.

Days of Our Lives Jennifer Horton (Melissa Reeves) approaches Jack Deveraux (Matthew Ashford) and asks him how he forced Haley into this admission. Eve and Jack lie about trying to help Tripp, and Jennifer calls him on his lies. Jack wants to go back to the hotel to wait for the results. J.J. walks up and punches Jack in the face.

Eve tells J.J. he needs to calm down, J.J. hopes they are proud of themselves. J.J. tells Jack and Eve they are both criminals as well. J.J. says he is done with Jack and beings to walk away; Jack tries to stop him. J.J. tells Jack he hates him, the feelings for the man he used to be is gone. J.J. tells Jack he should lose this election in humiliating fashion. Eve and Jack go to the hotel to wait for the election results.

Days Of Our Lives Spoilers – Haley Chen Has Many Regrets

Days of Our Lives Justin Kiriakis (Wally Kurth) joins Haley at the police department and tells her there is nothing he can do to help her. Agent Smith (Stacie Greenwell) arrives at the police station and tells Haley she’s on her way back to China. Hope Hernandez (Kristian Alfonso) exits to go to her office and tells Justin and Haley to let her know if they need anything. Agent Smith demands Haley sign a statement or she’s going after Tripp.

Melinda Trask (Laura Kai Chen) arrives and demands to see Haley. Hope tells Melinda nothing can be done, Haley will be deported. Justin threatens the ICE agent. Haley insists on Tripp being protected. Justin tells Haley how admirable her protection of Tripp is. Haley confronts Agent Smith about her pleasure in her deportation. Haley recounts to the agent that she knows more about this country and has only been here since she was sixteen.

Melinda arrives as the agent leaves. Melinda demands to know why Haley would do this. Haley misses their parents and is worried about going back to China. Haley tries to comfort Melinda and says she did everything she could to help her stay in the country, Melinda disagrees. Justin arrives, and J.J. asks if the judge made a ruling, Justin says yes. J.J. interrupts Melinda and Haley’s conversation.

Days Of Our Lives Spoilers – Rafe Hernandez Is Served

Justin informs them the judge is moving with the deportation order, Haley has to leave within the hour. Justin offers to call Tripp to pack Haley’s clothes, Melinda goes to get her money from the bank. J.J. blames himself for this, Haley disagrees. Haley tells J.J. she owes her life to him. She says she should have said yes, she could have had a real marriage with J.J. Haley kisses J.J. Agent Smith arrives demanding it is time to go. Melinda rushes in and says Haley is her daughter.

Days of Our Lives Rafe Hernandez (Galen Gering) is looking at his divorce papers when Lani Price (Sal Stowers) comes out and speaks to him about David. Lani asks what Rafe is looking at; he tells her divorce papers. Lani asks Rafe if he is going to fight the divorce. Rafe tells Lani he is tired of fighting. Rafe tells Lani the marriage was doomed because it started with a lie. Hope is crying over her lost marriage, Rafe arrives with the divorce papers. Hope tells Rafe there is no rush in signing them; he hands her the signed copies. Rafe wants to make this as painless as possible. Hope is shocked that Rafe has signed the papers.

Days of Our Lives Spoilers Thursday, May 16: Jack’s Big Victory – Hope Gets Fired – Haley And JJ Are On The Run https://t.co/37xhrGjM4n pic.twitter.com/X0HbhQDu4B

Days of Our lives Jennifer questions Hope about Haley’s situation. Hope doesn’t understand why Haley didn’t become a citizen. Hope tells Jennifer that she send Rafe divorce papers. She tells Jennifer she doesn’t want to hurt anymore. Hope says Rafe has taken his ring off, so he doesn’t want this marriage either. Eve gets a text; the winner is about to be projected.

Young and the Restless Spoilers Thursday, May 16: Adam Troubled by Delia Revelations, Blasts Secretive Victor – Mia Gets Off the Hook

Bold And The Beautiful Recap & Spoilers Wednesday, May 15: Brooke Thinks Katie’s Plan Will Be A Disaster – Shauna Tries To Seduce Bill