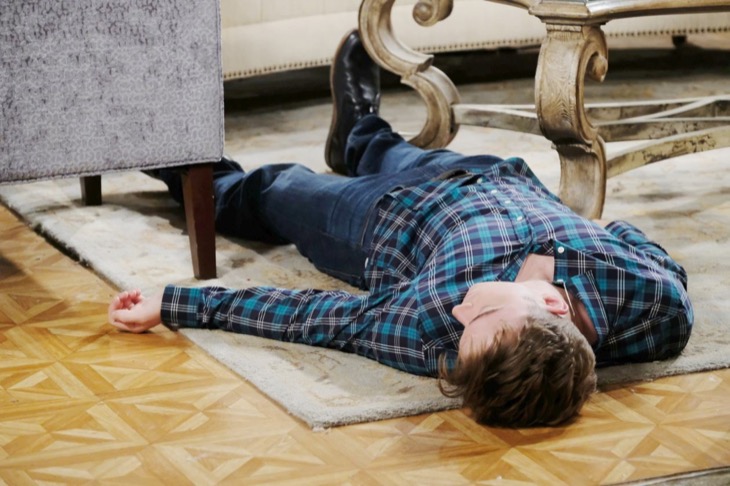 Days Of Our Lives Spoilers: Rex Brady Wants A Relationship Like John Black And Marlena Evan’s

Rex promises to love Sarah like that if she agrees to marry him. Eric Brady (Greg Vaughan) stops Sarah and asks about Will’s condition. Eric tells Sarah about Brady’s ultimatum. Eric tells Sarah Brady’s exact threat, and she is furious. Sarah says this is her mess and she is going to clean this up. Sarah stops Rex and tells him she has a confession to make.

Days of Our Lives’ Brady Black (Eric Martsolf) tries to blackmail Eric into suing for custody of Holly Jonas (Harlow and Scarlett Mallory). Brady tries to convince Eric that Chloe Lane (Nadia Bjorlin) is putting Holly in danger living with Stefan Dimera (Brandon Barash). Eric refuses to help Brady and accuses him of being jealous. Brady says he has his reasons for protecting Chloe just like Eric does Sarah. Brady says Eric will get Chloe out of that house or else. Brady goes to Doug’s Place and Chloe questions why Brady is there. Chloe is furious at Brady and asks if he was marking his territory. Brady asks Chloe what if it’s more than that. Brady wants to try a relationship with Chloe again, but she can’t think of romance right now. Brady says Chloe’s safety is his number one priority and he will make sure she’s safe.

Days Of Our Lives Spoilers: Gabi Hernandez And Stefan DiMera Heat Up

Days of Our Lives’ Gabi Hernandez (Camila Banus) shows up at the Dimera mansion and Chloe questions why Gabi told Brady about Stefan’s kiss. Gabi says she didn’t run to Brady and tell him anything. Chloe tells Gabi she seems to be there all the time for business reasons only to meddle in Chloe’s life. Stefan comes in and asks if they are fighting over him. Chloe tells Stefan she was trying to figure out why Gabi had to run to Brady and say to him about their kiss. Chloe leaves for work, and Stefan accuses Gabi of being jealous. Stefan accuses Gabi of wishing she was the one he kissed. Gabi tells Stefan everything he has done to upset her, Stefan says it doesn’t change the fact that Gabi wants him. Gabi kisses Stefan. Both Stefan and Gabi are shaken by that kiss and Stefan orders Gabi to leave.

In the latest #DAYS, Leo and Diana have a spat.https://t.co/ZsCmioRrzb pic.twitter.com/fj0Edj2wRO

Days of Our Lives’ Will Horton (Chandler Massey) collapsed on the floor at the Kiriakis mansion. EMTs arrive to assist Will. J.J. Deveraux (Casey Moss) uses smelling salts to bring Will back to consciousness. Will feels find, but Sonny Kiriakis (Freddie Smith) and J.J. insist Will go to the hospital. Will arrives at the hospital and tells Eric and Sarah about Leo Stark’s (Greg Rikaart) curse. Will wonders if Leo poisoned him. Rex and Sarah run tests on Will to see what is wrong with him. Sonny tells Will J.J. may be right because Leo didn’t have a chance to poison him. Sonny vows not to let anyone, or anything hurt him again. Sonny says they will deal with whatever is wrong together.

In the latest #DAYS, Ciara insists on taking Ben to the hospital. https://t.co/ZsCmioRrzb pic.twitter.com/QBDOmi6gUf

Days of Our Lives’ Tripp Dalton (Lucas Adams) and Haley Chen (Thia Megia) discuss how to spin their love story to the authorities. Tripp and Haley make up a story about how they fell in love when she bandaged his arm at the hospital. Tripp uses Claire Brady (Olivia Rose Keegan) working with Ben Weston (Robert Scott Wilson) as an excuse to break up with his girlfriend and date Haley. Tripp and Haley plan to say they realized how much they loved each other when he moved her into the loft. J.J. interrupts and tells them this marriage won’t work. J.J. tells Tripp that he has a girlfriend and everyone knows it. J.J. believes the authorities would believe he and Haley as a couple easier. Tripp doesn’t believe that Claire isn’t on board with this plan. J.J. agrees to be Tripp’s best man.

Days of Our Lives Claire goes to Eve Donovan (Kassie DePaiva) for help to stop Tripp and Haley’s wedding. Eve wants to schedule a press conference and have Claire play on the public’s sympathy. Claire tells Eve that she can’t do that and refuses to do the press conference. Claire explains about pretending to help Tripp and Haley, and Claire is afraid of being dumped for not doesn’t stick to the plan. Eve tells Claire how great she has been so far. Claire doesn’t want Tripp to hate her and doesn’t want to lose him. Claire and Eve scheme to stop Tripp and Haley’s marriage. Eve wants to get Tripp on tape saying this marriage is a fraud.