Days Of Our Lives Spoilers & Recap Wednesday, March 20: JJ Proposes To Haley – Heat Is On For Ben And Ciara After He Saves Her Life 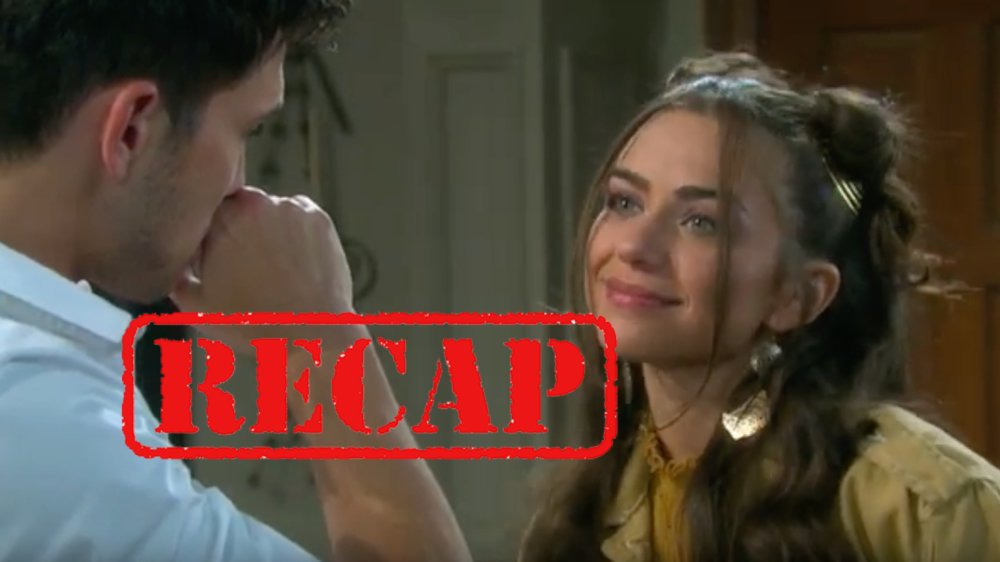 Days of Our Lives (DOOL) recap for Wednesday, March 20, 2019, reveals Ben Weston (Robert Scott Wilson) and Ciara Brady ( Victoria Konefal) are kissing in the living room at the Dimera mansion when someone starts shooting through the window.

Ben grabs her and pulls her to the floor to keep her from getting hit. He manages to get Ciara into the entrance hallway of the mansion where they are joined by a distraught Chloe Lane (Nadia Bjorlin) and Stefan Dimera (Tyler Christopher).

Ben runs back into the living room to assess the situation, Ciara attempts to follow, but Stefan stops her. He returns with a card that Chloe recognizes from the cartel and informs Chloe and Stefan that the men were there to kill her. Stefan convinces Chloe to go upstairs while Ben takes Ciara home.

Chloe calls to check on the children and is relieved to find they are fine. Stefan assures her he is adding more security and will get the men who are after her. He tells Chloe she and the children are safe there.

Days of Our Lives Tripp Dalton (Lucas Adams) questions Claire Brady (Olivia Rose Keegan) about turning in Haley Chen (Thia Megia) to Eve Donovan (Kassie DePaiva) and Jack Deveraux (Matthew Ashford). Claire lies and says she had nothing to do with it and is upset that Tripp doesn’t believe her.

She leaves, claiming to head to the library to study but runs to Eve’s room and convinces her to cover for her. Tripp starts to follow, but Kayla Johnson (Mary Beth Evans) arrives and tells Tripp his father would have done the same for Haley. Tripp his suspicions to Kayla and she says Claire is not above doing whatever it takes to get what she wants.

Days Of Our Lives Spoilers – Haley Chen Blames Herself

Justin Kiriakis ( Wally Kurth) is hopeful that the judge will be lenient with Haley. She is released and awaits the judge’s decision on her fate. J.J. Deveraux (Casey Moss) meets Justin and Haley at the police department and convinces her to go to the pub with him. J.J. and Haley talk and she forgives him for confiding in Jack Deveraux (Matthew Ashford).

Haley takes the blame for her own choices. She says it doesn’t matter if she gets deported because she had no one here and her sister won’t even return her calls. J.J. tells Haley she will always have him. Justin arrives and tells them the judge has made a decision – Haley is to be deported in 30 days. Justin leaves, and Haley says she wants to see as much of Salem as she can before she has to depart. J.J. asks Haley to marry him so she can stay in Salem.

Jennifer Deveraux (Melissa Reeves) shows up in the square to interview Jack. She asks him how he feels about ruining a woman’s life for a campaign stunt. Jack tells her she is biased and wants to do the interview with someone else. He then suggests he threw himself down an elevator shaft to get away from her. Jennifer throws water in his face. Kayla arrives and berates Jack for using Tripp as well.

Ben and Ciara arrive at the loft and Ben pour her some ginger ale. She tells Ben he saved her life again. He tells her she was in danger because of him that that proves his point that they shouldn’t be together.

Days Of Our Lives Spoilers: Diana’s Days Are Numbered – Will She Be Tied To Marlena’s Attack? https://t.co/XOBVwThNyS pic.twitter.com/8S6sf0CGR6

Ciara wants things with Ben to be the way they were at the cabin as she takes care of his hurt hand. They start to kiss but Ben pulls away. She wants to take it slow like they did in the beginning and they begin to kiss again.

Ben wants to be close to Ciara as well but still feels he may hurt her. She is determined to convince him otherwise, and they begin to kiss again.