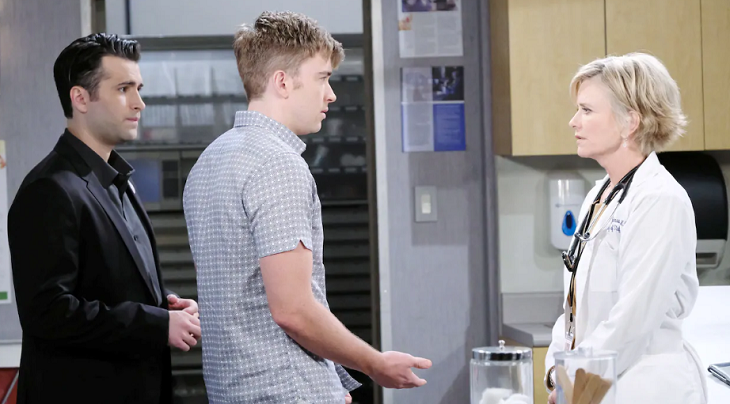 Gabi Hernandez (Camila Banus) shows up and claims to have unfinished business with Stefan. Chloe leaves Stefan and Gabi to talk while she goes to work at Doug’s Place. Stefan tells Gabi they don’t have any unfinished business, she pulls him into a kiss. Stefan tells Gabi they can’t do this again. Stefan doesn’t want to do this again, Chloe might find out. Gabi tells Stefan that Chloe is never going to forget that her daughter was kidnapped on their first date. She offers to comfort Stefan, he finds Holly’s toy and pulls away.

Stefan says this must be the toy Chloe was looking for to have buried with Holly. Gabi says Stefan was very attached to Holly. Gabi tells Stefan she will be there after the funeral if he needs her. Stefan wants to know what Gabi is up to with her concern. Stefan tells Gabi every time he turns around she is on his doorstep pretending to have business to discuss. Stefan leaves to find Chloe.

Days of Our Lives Will Horton (Chandler Massey) and Sonny Kiriakis (Freddie Smith) are at the hospital to find out why he is losing his memory. Rex Brady (Kyle Lowder) tries to explain that Will is suffering short term memory loss because of swelling due to the radiation. Will tells Sonny that Rex is not being completely honest with them.

Kayla Johnson (Mary Beth Evans) comes in to give Will and Sonny more news. Kayla tells Will a compound in the serum he took to get his memory back caused his tumor. Kayla can’t say for sure that is what caused the tumor, but there are risks with any untested drug. Kayla tells Will she’s not sure what to do about this tumor.

Days of Our Lives Marlena Evans (Deidre Hall) tries to comfort Eric Brady (Greg Vaughan) and tells him Nicole Walker (Arianne Zucker) will come around. Eric says he dismissed Brady Black’s (Eric Martsolf) warning and didn’t fight for Holly. Marlena wants to talk to Nicole; Eric refuses to let her. Marlena believes this must have been hard for Sarah Horton (Linsey Godfrey) to go to Nicole. Marlena apologizes for revealing Eric’s secret to Sarah.

Marlena says they will have to discuss his feelings for Sarah. Eric thinks Marlena wants him to let go of Nicole to be with Sarah. She tells Eric he and Sarah need to be honest about their feelings. Marlena tells Eric she feels Sarah is marrying Rex because she can’t be with him. Marlena tells Eric that she has been where he is and hurt everyone she loves. She doesn’t want Eric to make the same mistake. Sarah comes to Eric and apologizes for going behind his back and talking to Nicole.

Days of Our Lives Sarah attempts to comfort Nicole. Nicole tells Sarah they all failed to protect Holly. Nicole says Brady is the only one who tried to protect Holly and she died because no one would help. Sarah tells Nicole she would have moved Heaven and earth to save Holly.

Nicole wants to know why her feelings for Eric are so important to Sarah. Sarah tells Nicole she and Eric are good friends. Nicole says she and Eric looked very cozy when they came to Eric’s apartment. She asks if there is something going on with Sarah and Eric.

Days Of Our Lives Spoilers – Xander Cook Is Offered A Job

Days of Our Lives Xander Cook (Paul Telfer) wants Brady to hand over the CEO job in return for divorcing Nicole. Brady tells Xander he will buy the recording. Brady asks Xander to name a price; he will buy him a company. Xander wants the respect his family owes him.

Days of Our Lives #DOOL Spoilers: Claire Gets Bad News – Sends Her Over The Deep End? @celebratesoaps https://t.co/IX6AnssS92

Brady offers Xander an executive position that would give him power. Brady tells Xander this is the best offer he’s going to get. Brady tells Xander if he does a good job, he can prove himself to Victor. Xander wants an office with a window and the company car. Xander refuses to give up the recording until he gets his contract.