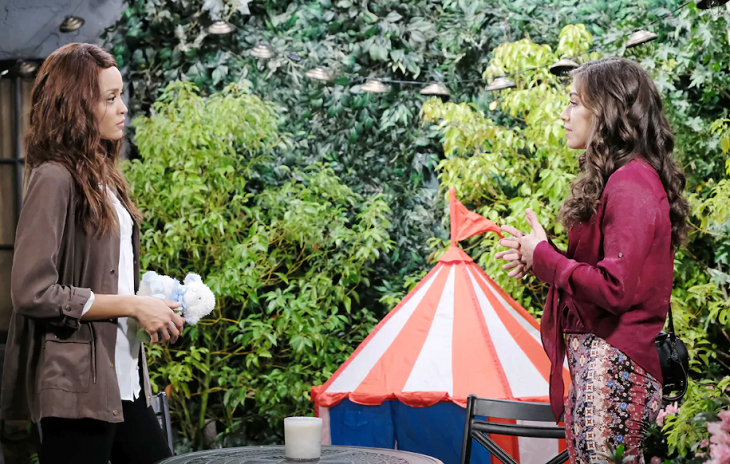 Days of Our Lives (DOOL) recap for Monday, May 1, 2019, reveals Ben Weston (Robert Scott Wilson) is summoned to sign a statement at the D.A.’s office.

Ben blames himself for Holly Jonas’ (Harlow and Scarlett Mallory), and Ciara Brady (Victoria Konefal) tries to comfort him. Ben hugs Ciara and tells her everyone failed to keep Holly safe. Ciara wants Ben to make a difference in David’s life. Ciara plans to go vote and then talk to Rafe about the baby. Ben arrives at the police station to sign his statement and finds a file on Xander Cook (Paul Telfer).

Ben signs his statement and hands it to Ted Laurant (Gilles Marini). He runs into Ciara in the park and invites her to lunch. Ciara lets Ben know about the conversation with Lani. Ben brings up Ted’s reaction to him. Ben and Ciara see Rafe and Lani with the baby and realize she lied.

Days Of Our Lives Spoilers – Lani Price Offers Her Support

Days of Our Lives Rafe Hernandez (Galen Gering) is reliving the accident, David cries, and Lani Price (Sal Stowers) comes to the rescue. Rafe questions how he can be responsible for any baby after what happened to Holly. Lani tells Rafe he can’t blame himself. Rafe thinks if he had done something different, Nicole Walker (Arianne Zucker) would have her daughter. He believes things would have gone according to plan if he hadn’t interfered. Lani tells Rafe she would have done the same thing.

Rafe questions why only he and Lani see that something is off with Ted. Rafe informs Lani of his suspension and his suggestion that he and Hopes separation be permanent. Lani asks Rafe where his ring is; he tells her he threw it off a cliff. Lani wants Rafe to accompany her and David to the park. Lani and Rafe decide to vote while they are out.

Ciara shows up to speak to Rafe. Lani argues that Ben shouldn’t be around him. Lani tells Ciara Ben’s not seeing David. Ciara wants Rafe to speak to Jordan Ridgeway (Chrishell Hartley), Lani says he won’t go behind Jordan’s back. Lani tells Ciara that David is sick and doesn’t want Ciara to have Ben come over. Rafe and Lani take David to the pub, Hope Hernandez (Kristian Alfonso) witnesses a close moment with them. Hope notices Rafe’s ring is gone and walks out. Rafe thanks Lani for helping him with the childcare, he’s learned everything from her.

Days Of Our Lives Spoilers – Xander Cook Makes A Threat

Days of Our Lives Ted is trying to figure out who Xander is working with in this kidnapping scheme. Ted calls the morgue for a positive I.D. on the bodies in the van. Hope asks Ted if he has any reason to believe that wasn’t Holly in the van. Ted claims to be trying to make sure the coroner is being thorough. Ted claims that he should have fought Rafe harder. Hope tells Ted she suspended Rafe. Hope arrives back at the police station; Ted hears her tell Belle Brady (Martha Madison) she wants to file for divorce.

Days of Our Lives Xander pretends to be shocked that Nicole is alive and kisses her. Brady Black (Eric Martsolf) asks if Xander didn’t know Nicole was alive, why is he there. Xander claims to be there because of Holly. Xander claims to be there to be with Victor Kiriakis (John Aniston) and Maggie Kiriakis (Suzanne Rogers). He wants Nicole to hear what he has to say first. Heclaims to be sorry for Nicole’s loss; he was Holly’s stepfather. Nicole tells Xander they were never happy as a family. Xander brings up Eric and the fact that he’s still married to Nicole. Nicole tells Xander they are getting a divorce.

Xander says he still has the recording and shows it to Nicole. Xander claims to have found the recording in the wreckage of the building. He claims to want to give the recording to Victor, Brady asks for it. Xander is determined to hold it over Nicole’s head. Brady stops Xander as he tries to leave. Brady tells Xander to let this go now. Xander agrees to give Brady the recording for a price.

Sarah defends Eric’s decision for not pursuing custody. Sarah suggests Eric talk to Nicole. Eric informs Sarah that Maggie told Nicole that Brady was the only one who tried to convince Chloe to get out of the Dimera mansion. Eric believes if he stood up, Holly would still be alive. Sarah tells Eric he doesn’t get to blame himself for not falling for blackmail.

Eric says Nicole needs all the support she can get. Sarah wants to talk to Nicole; Eric stops her. Eric apologizes for hurting Sarah; she tells him she’s going through with the wedding to Rex Brady (Kyle Lowder). Sarah tells Eric they are putting the wedding off for a while because of Holly’s death. Eric thanks Sarah for her support and she leaves.

Bold And The Beautiful Spoilers & Recap Monday, May 13: Liam Pleads With Hope – Flo And Wyatt Kiss