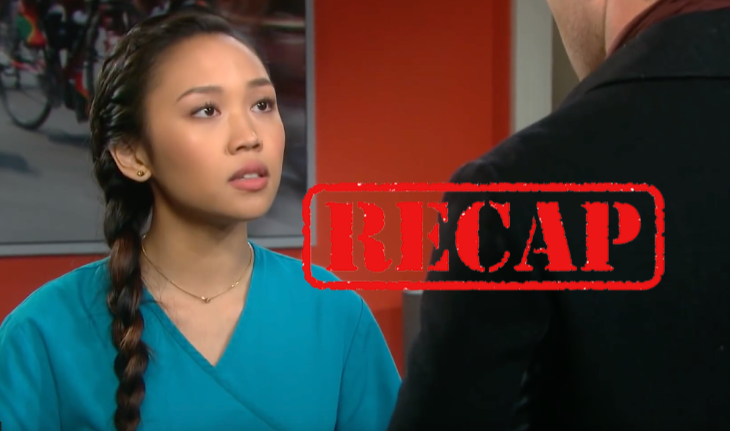 Days of Our Lives (DOOL) recap for Friday, January 25, 2019, reveals Haley (Thia Megia) is at the apartment thinking about singing with J.J.(Casey Moss). J.J. shows up and brings Haley coffee. J.J. informs Haley that Abe (James Reynolds) just got a new opponent for mayor.

Haley assumes J.J. is talking about his dad; he says no, but he thinks she knows who he is talking about joining. J.J. asks Haley if she knew Melinda (Laura Kai Chen) was going to run for mayor. Haley was hoping Melinda would change her mind. J.J. asks what he is missing, Haley says she has to go. Haley bumps into Melinda outside the pub and asks if she’s running for mayor.

Melinda tells Haley she needs to stay away from her. Haley tells Melinda she’s staying with J.J. Melinda questions if Haley has told anyone anything else. Haley says she might have said something to Marlena. Melinda is happy Haley is getting the help she needs and reminds her she needs to stay quiet. Haley tells Melinda she would never hurt her, she owes her too much. Melinda tells Haley to take care of herself. J.J. walks up and asks Haley what that conversation was about, Haley accuses him of following her, he just brought her the phone.

Days Of Our Lives Spoilers Jennifer Tries To Help Jack

Days of Our Lives’ Jennifer (Melissa Reeves) asks Abe for a comment about the announcement in the paper this morning. Abe says this is cynical and asks why Jennifer didn’t warn him. Abe says Melinda is a heartless barracuda with no empathy for anyone. Melinda walks up and tells her to trash her to her face at least. Melinda says Abe never bothered her aggressiveness when she was working for him.

Melinda accuses Jennifer of being biased toward Abe. Abe is furious with Melinda and doesn’t feel she deserves to be mayor. Jack (Matthew Ashford) comes up and shakes hands with Abe. Eve (Kassie DePaiva) announces that Jack is running for mayor as well. Jennifer tries to change Jack’s mind, and he agrees to give her five minutes to talk to him. Jack demands to know why he would make such a terrible mayor. Jennifer thinks Jack would be a great mayor, but his history would work against him.

Eve has a bone to pick with Jack! #DAYS pic.twitter.com/kkZAGdjarp

Days of Our Lives’ Jack and Eve are watching his campaign announcement; she thinks he’s going to be the next mayor of Salem. Jack wants to hold a press conference; Eve thinks they should upload the video. Eve can’t believe Melinda beat them to the punch. Melinda is challenging Abe on the same platform they planned to use. Jack wants to run as an independent. Eve tells Jack they can’t get money that way and vows to find another way. Eve arrives home to find Xander (Paul Telfer) waiting; he says they have unfinished business.

Days of Our Lives’ Brady (Eric Martsolf) tells Chloe (Nadia Bjorlin) that he’s the new CEO of Titan. Chloe hugs Brady and tells him she knew it. Chloe tells Brady he loves Victor a little bit too. Brady thanks Chloe for helping with this. Chloe is grateful to Brady for his help. Chloe hands Brady a check for her payment, and he tears it up. Brady tells Chloe she has been his rock for a long time and canceled the debt.

Brady suggests they deserve better than the people they have been within the past. Chloe says she will probably be on the shelf the rest of her life. Brady tells Chloe she may not have to look as far as she thinks for someone. Xander comes in wanting a drink and stays to talk to Brady.

Brady offers Xander a job in the janitorial department. Xander tells Brady to have his little joke and act like he’s not worthy to be part of the family. Xander tells Brady he just made his first mistake as CEO. Xander tells Brady how much he got out of Nicole’s (Arianne Zucker) confession and told Brady he never leaves empty-handed. Chloe takes the flowers back to work, and Brady asks if she has a secret admirer.

Days of Our Lives’ Eric (Greg Vaughan) is thinking about finding Sarah (Linsey Godfrey) in bed with Xander and throws a cup across the room almost hitting Rex (Kyle Lowder). Rex says Eric got up on the wrong side of the bed. Rex keeps trying to get Eric to open up to him, and Eric wants him to leave. Eric tells Rex he shouldn’t have slept with Sarah’s sister in the first place. Eric wants nothing to do with Sarah or Rex and leaves the room. Eric tells Rex that he’s cheated on Sarah twice, maybe she is done with him.

Rex says he will talk to Sarah himself and leaves. Eric is on the way out as Sarah arrives. Sarah brings back Eric’s shirt and tells her he wants their old relationship back. Eric tells Sarah nothing she can say will change things. Sarah tells Eric she is sorry and made a terrible mistake. Sarah asks Eric to tell her they can get past this.

She wanted you Eric. If you would’ve just gave her the 🍆 she wouldn’t have went to Xander. Rex is just your alien brother. You could’ve betrayed him 💁🏾‍♀️ #days #dool pic.twitter.com/vc4F2CQNkT

Days Of Our Lives Rex Is Upset By His Discovery

Sarah rethinks her argument with Eric and is very upset. Rex arrives at Victor’s (John Aniston) to talk to Sarah and bring her flowers. Chloe tells Rex that isn’t going to make up for sleeping with Sarah’s sister. Rex goes upstairs and finds Sarah gone; he also finds a condom wrapper in the floor. Rex gives Chloe the flowers and tells her someone else got to Sarah first.