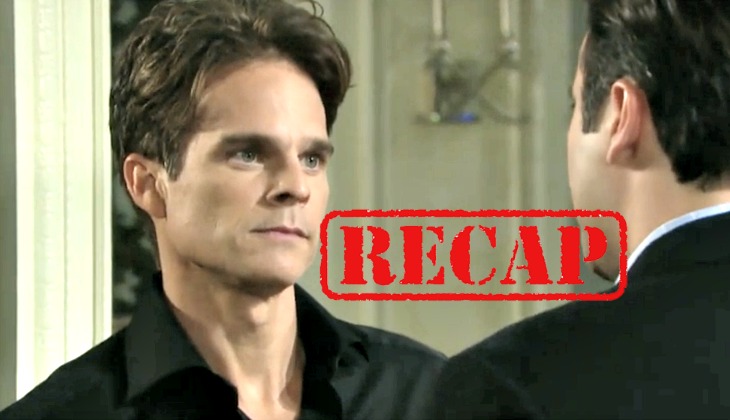 Days of Our Lives (DOOL) recap for Wednesday, January 9, 2018 reveals Claire (Olivia Rose Keegan) wants Tripp (Lucas Adams) to take a selfie with her. Claire says her fans want to see what is happening in her life.

Claire asks Tripp to do it as a favor to her. Claire says it’s not so back, Tripp agrees. Ciara (Victoria Konefal) comes in before things go any further. Ciara apologizes for interrupting and starts to head to her room, Tripp stops her and asks if she’s having trouble with Ben. Ciara says they have a problem over his job. Tripp says that there is no wonder that Ciara is having problems with Ben (Robert Scott Wilson).

Working for Stefan (Tyler Christopher) proves that Ben is still dangerous. Tripp gets a text about Steve’s (Stephen Nichols) case and leaves. Claire curses Ben and says he’s not going to screw this up for her. Claire calls Ben and threatens him, Ciara overhears her leaving a voice mail and asks what kind of deal she had with Ben. Claire tries to lie to Ciara. Finally she admits to plotting to break up Ciara and Tripp. Ben shows up as Claire and Ciara are arguing and wants to talk. Claire tells Ciara she doesn’t have to tell Tripp about this. Ciara asks Ben how he could conspire against her like that.

In the latest #DAYS, Abigail and Ciara have a heart-to-heart about Ben.https://t.co/ZsCmioRrzb pic.twitter.com/GHuGZt8OTw

Days Of Our Lives Spoilers Chad Give Ben An Ultimatum

Days of Our Lives’ Chad tells Ben he doesn’t work for Chad (Billy Flynn) anymore he works for him. Ben asks what happened to Stefan; Chad says he’s been arrested for treason and will be in jail for a long time. Ben explains to Chad that no one else would give him a job, so he took one with Stefan. Chad asks if Ben blindly followed Stefan’s orders, Ben said yet. Ben tells Chad that he came here tonight to quit. Ben tells Chad he will work as his head of security and not have to quit.

Chad tells Ben he’s fired. Chad decides to interview Ben, and he tells him he is dating Ciara. Ben tells Chad that Ciara didn’t want him doing things like kidnapping Gabi (Camila Banus). Chad questions Ben about his and Ciara’s relationship. Ben tells Chad that Ciara wouldn’t have a problem if he were working for him. Chad asks how Hope feels about him, and Ciara and Ben tells him she’s tried to run him out of town. Ben says he will do any job Chad has for him.

.@MrRobertScott and @victoriakonefal are heating up the #DAYS podcast! 🔥 Listen on @ApplePodcasts and Google Podcasts. pic.twitter.com/qZ1dYLlDRk

Chad asks how hiring him would look to Abby (Kate Mansi). Chad also thinks to be close to Ben will hurt Ciara. Chad tells Ben to cut Ciara a break and let her go. Chad offers to pay Ben two weeks wages, and he will let him go. Chad tells Ben they will talk if he breaks it off with Ciara. Chad talks to Stefano’s (Joe Mascolo) picture about his plan to get his family back. Chad calls J.J. (Casey Moss) and asks for his help to get Abby back.

Days of Our Lives’ Gabi runs into J.J. in the square. J.J. wants to talk to Gabi; she tells him to go ahead and rip into her over Abby. J.J. tells Gabi she did this to him as well. Gabi tells J.J. she knows he is upset. J.J. tells her upset, disappointed and asks if he should go on but she stops him. J.J. tells Gabi she took advantage of him and used it to hurt his sister. J.J. says Abby told him what Gabi was doing and he took her side. Gabi tells J.J. that she was obsessed about getting revenge on Abby and Stefan.

J.J. tells Gabi he doesn’t want to hear her excuses. Gabi said she tried reaching out to him. Gabi says J.J. kept her for going over the edge; he tells her that she still kept going. Gabi says she wishes she could have been stronger, but she wanted Stefan and Abby to hurt as she did. Gabi says she had remorse for hurting Abby, but the pain was stronger than her remorse. J.J. asks how destroying Abby and Stefan’s lives would make her better.

Days Of Our Lives Xander Offers Leo A Deal

Days of Our Lives’ Leo (Greg Rikaart) catches Sonny (Freddie Smith) on the phone with Will. Will asks about Leo’s Achilles heel, but he can’t answer. Leo sees Xander (Paul Telfer) and loses his train of thought. Sonny says he heard that Xander was back. Leo asks Sonny to introduce him to Xander. Xander is going to the hot tub, Leo plans to join him. Sonny tells Xander he owes him one. Victor (John Aniston) comes in and tells Xander to get dressed they need to talk.

A rare photo of Xander with a shirt. 😂 #DAYS pic.twitter.com/k8pflqlr64

Xander wants the job of CEO of Titan; Victor refuses unless he shows him all the information he has. Leo asks Xander if he is ready to hit the hot tub, Xander offers him a drink instead. Xander questions Leo about blackmailing Sonny. Xander asks what Leo is blackmailing Sonny with now. Leo tells Xander it’s about love. Xander tells Leo to let him know what he has, and they can try to help each other. Leo asks Xander if this has anything to do with his conversation with Victor.

Xander accuses Leo of eavesdropping. Xander asks if Leo is going to help him. Leo asks what’s in it for him, Leo caresses Xander’s chest and says he can think of something. Xander looks at Leo with a confused, almost disgusted look. Xander backs away and tells Leo he is practically family. Xander tries to tell Leo that he’s not into guys. Leo asks if Xander has ever heard of “gay for pay” and tells him where his room is.

Days of Our Lives’ Will goes by the pub to talk to Roman (Josh Taylor). Roman thinks if Victor gives Leo enough money he will disappear. Sonny joins Will at the pub and tells him Xander occupies Leo at the moment. Sonny says Xander and Leo are going to the hot tub. Will hope it boils them both. Sonny is glad to see Will smiling again. Sonny and Will make plans to meet in the park in ten minutes.

Days of Our Lives Fans Have Something To Celebrate!

Will meets Sonny, and he kisses him. Sonny tells Will that Leo has issues with his mom. Will and Sonny decide to find Leo’s mom. Sonny asks Will if he can ask John to help find Leo’s mom. Will says he can use the Spectator to find things out. Will says they are going to take Leo down before he takes them down. Sonny finds this rather hot and kisses Will.

Days of Our Lives Tripp shows up at the pub to talk to Roman. Roman tells Tripp about Stefan’s arrest. Roman thanks Tripp for looking out for Kayla and Ciara. Tripp tells Roman there may be a little bit of trouble in paradise. Roman asks Tripp if he still has feelings for Ciara. Roman asks Tripp if he’s moving on with Claire. Roman tells Tripp Claire is a sweet girl and he deserves to be happy too.

Young and the Restless Recap Wednesday, January 9: Victor Admits He Hated JT But Would Not Kill Him, Jack Warns Him To Be Careful