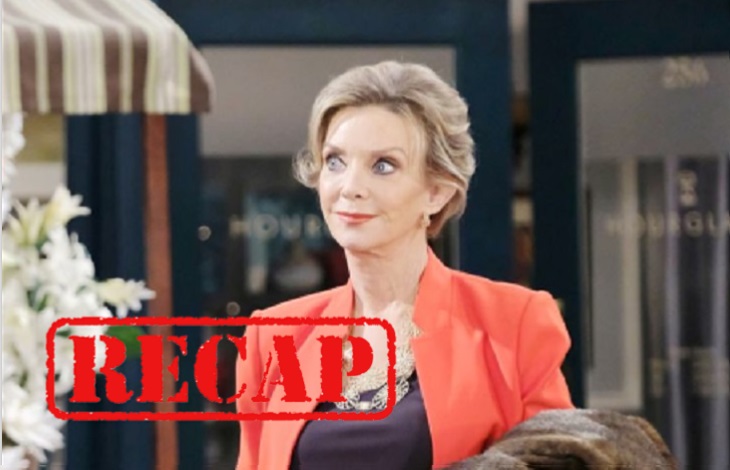 Days of Our Lives Marlena (Deidre Hall) is on the phone with Sami (Alison Sweeney) talking about Will’s (Chandler Massey) arrest. Marlena tells Sami she is handling things and discourages her from coming to Salem. Marlena is determined to make sure Leo does nothing to ruin Will’s life.

Eric (Greg Vaughan) stops by to invite Marlena to a fundraiser and tells her Sarah (Linsey Godfrey) spent the night with Rex, so he didn’t get much sleep. Marlena wants Eric to talk to her about it, but he refuses. She turns things around and asks him what he would advise someone he was counseling to do. Marlena tells Eric that Will and Sonny (Freddie Smith) got out on bail.

Leo (Greg Rikaart) confronts Will in the square and pushes Will into punching him. He threatens to kill Will and Marlena goes after him. John (Drake Hogestyn) makes Marlena turn Leo loose and tries to make Will leave, but Marlena defends him. John says if Will hadn’t rolled Leo up in a carpet and left him for dead they wouldn’t be here. Marlena questions why he is defending Leo.

Leo comes downstairs and asks Victor (John Aniston) who is moving in now. Victor tells Leo he is moving out. He demands Leo get dressed and stop hitting on every male in the house. Leo says he’s not divorcing Sonny without a fight. He then tells Victor he can’t put an end to the marriage. He says the board will cause issues if Victor admits to being in on the farce.

Days Of Our Lives Spoilers: Rex Proposes To Sarah – Will There Be A Wedding?

Leo continues to threaten him, and Victor tells Leo he has no idea who he is messing with. Diana (Judith Chapman) shows up and demands to speak to Victor alone. Victor tells Diana to call off her spawn, she agrees to when she gets everything she wants.

Diana tells Victor she is still in love with John and offers to help him if he helps her get John back. He tells Diana that John is married to Marlena. Diana says Victor doesn’t care about Marlena. Diana says Sonny will spend decades in prison without his help. Diana says her love for John has never changed and asks if they have a deal. Sonny witnesses part of the exchange.

Diana reads the article in the paper about how Leo has charged Will and Sonny with murder. John arrives and Diana thanks him for not telling Marlena the truth about Leo. Diana defends Leo to John, who wants something to neutralize Leo, and John promises to protect him. He begs Diana to help him end this nightmare.

Diana tells John that she made a huge mistake leaving him and Salem and that Leo’s stepfather was abusive. John is sorry he wasn’t there for her and Leo. She says she came back to fix things with Leo and to see John again. John still wants to tell Marlena the truth about Leo. Diana begs John to stay quiet a little while longer. He doesn’t like keeping secrets, but Diana promises to try to get through to Leo.

Days Of Our Lives – Will And Sonny Make Bail

Justin (Wally Kurth) arrives at the police station to talk to Will and Sonny. He demands to know why they spoke to Eli (Lamon Archey) without an attorney. Justin tells them they have admitted to caving into blackmail and trying to dispose of a body. Justin tells them it is worse than bad.

He says that Ted (Gilles Marini) is the one who helped Leo and can’t prove that Leo tried to blackmail them. Justin tells them Ted will fight to prove their guilt because he won’t go down with Leo but he is not optimistic they can win this case. Justin gets Sonny and Will out on bail but says they still can’t be together. He advises them not to have any contact at all until this is over. Justin gives them a minute to say goodbye, and that is all.

Sarah is dreaming about Eric. Eric touches her face, and she calls to Rex. Eric is on Sarah’s bed, and Sarah asks what Eric is doing there. He tells her there is no point in fighting what they feel for each other and he knows she feels it too. Eric and Sarah begin to kiss.

Days Of Our Lives – Eric Wants To Talk To Sarah

Rex wakes Sarah up and wants to take her to breakfast, unless she wants to pick up where they left off. Sarah tells Rex a dream unsettled her and that she has a confession to make. Sarah tells Rex about her conversation with Eric about Valentine’s Day. She tells him about her suspicions, and she doesn’t know what will make those feelings go away. Rex says he needs to do more to set Sarah’s mind at ease.

Sarah goes to work, and Eric approaches her there, saying they need to talk. Sarah thinks he wants to discuss Valentine’s Day, but that isn’t what he wants, he wants them to be honest with each other. Rex arrives with donuts and flowers, interrupting their conversation. Rex proposes to Sarah again.

John discusses his conversation with Diana with Roman (Josh Taylor). John tells Roman he feels sorry for Leo because of his abuse. He believes it wouldn’t have happened if Diana had told him about Leo. Roman tells John he built a good relationship with Paul and can do the same with Leo. John leaves to find Marlena and Rex arrives, asking for Roman’s advice.