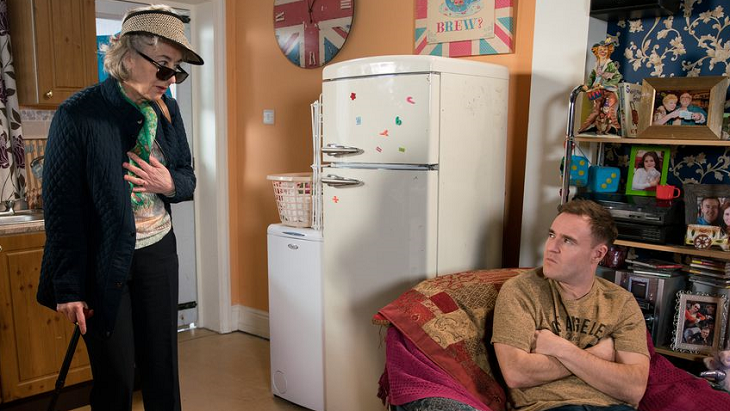 Coronation Street spoilers tease that Tyrone Dobbs (Alan Halsall) will be none too pleased when he comes face to face with Evelyn Plummer (Maureen Lipman). Here’s what you need to know.

Tyrone was left horrified when James Burrows (Ali Neeson) admitted he lost Evelyn during their vacation to Paris. Just before he and Cerberus were about to board a train, Evelyn was spotted chatting to a police officer. She told them to board the train without them and that she would catch up with them soon. Unfortunately, Evelyn never boarded the train.

James had no idea what happened and was left panic-stricken after realizing that Evelyn was missing. Tyrone started to search for her and had even asked for Craig to help him out. And when he found out what had happened, he was left infuriated over the truth.

When Evelyn shows up back at home, Tyrone lashes out at her. He’s never been this angry before, even though he’s secretly relieved that she’s at home and safe again. Nevertheless, he tells Evelyn to pack her bags and move out of his house. He also points out that she owes him 750 Euros for helping her come back home.

Coronation Street – Evelyn Pleads With Tyrone To Calm Down

With no place to go, Evelyn pleads with him to calm down as she tries hard to hopefully change his mind. Either way, Evelyn knows that she is going to have to work extra hard to make it up to him. Of course, fans will have to tune in to see what happens next!

Poor Tyrone. It's never straightforward with his Nanna. Do you think Ty will be able to get Evelyn out of whatever trouble she's in this time? We hope so #Ad pic.twitter.com/wP2pP9Z0I9

Coronation Street airs weeknights on the ITV network and is available on Britbox in the U.S. Check your local listings for times. For now, drop us a line with your thoughts in our comments section below. And as always, come back to Soap Opera Spy for all the latest news, updates and spoilers on Coronation Street, Eastenders and all of your favorite daytime and British soaps right here.

Days of Our Lives Spoilers: Sarah Admits Her Feelings To Eric – Will He Reciprocate?