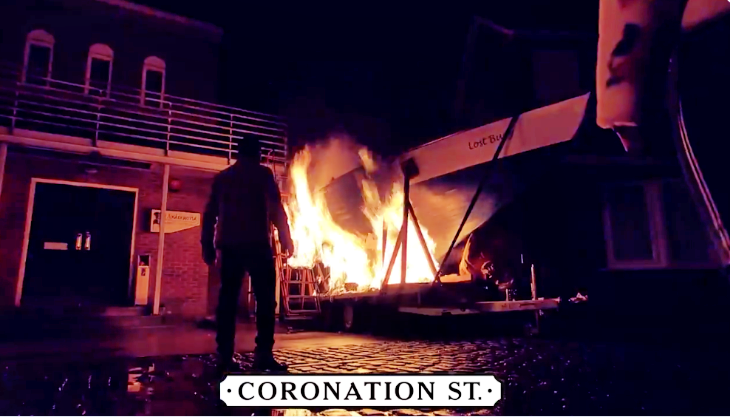 The boat fire trailer was a followup to last December’s confirmation that a character will make a surprising comeback and set Peter’s boat on fire. In a previous report, it was suggested that both Simon and Peter will be caught in a boat fire and the latter will manage to save his son, who passes out due to smoke inhalation. So, it would seem that what was once a rumor has been confirmed following the release of the trailer.

Meanwhile, the culprit who sets the boat on fire could very well be Roy Cropper. (David Neilson) Unconfirmed tabloid reports came out suggesting that Roy accidentally sets a boat on fire while sleepwalking. Things get out of hand for Roy who is still trying to cope with the passing of his wife who died four years ago and receives the devastating news that his mother has died. Sylvia is rushed to the hospital after having a heart attack. Roy takes off immediately to see his mom but by the time he arrives, he was already too late. Sylvia has already passed away.

The trailer also revealed other exciting storylines. Sarah Platt (Tina O’Brien) may have an affair with Adam Barlow, something steamy might happen between Gemma and Chesney after flirting around for several months, and James revealed that it was Evelyn Plummer, (Maureen Lipman) Tyrone Dobb’s (lan Halsall) gran, who left him outside a police station when he was a baby.

Additionally, the teaser came after other big storylines were announced including Amy Barlow’s (Elle Mulvaney) forthcoming teen pregnancy as well as the return of Kylie Platt’s killer. Amy’s pregnancy will change her life and that of her parents, who will struggle to accept what has happened. Meanwhile, Clayton Hibbs, the man responsible for Kylie Platt’s death in 2016, will return to the screen. Viewers have to wait and see what he’ll be up to in prison, where he was sentenced to stay for at least 15 years.

Young And The Restless Rumor: Phyllis And JT Partners – Working Together To Frame Victor?