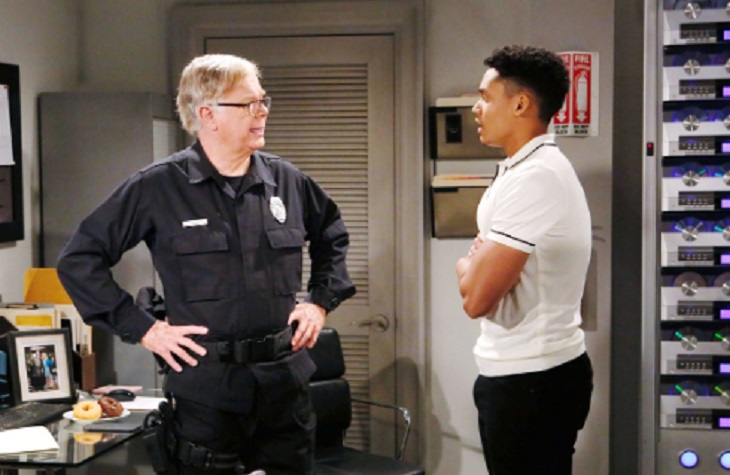 The Bold and the Beautiful (B&B) spoilers for the week of July 8 tease that Xander Avant (Adain Bradley) will go up against Thomas Forrester (Matthew Atkinson), when he accuses him of murdering Emma Barber (Nia Sioux).

The confrontation gets scary after Xander sees a security video of Thomas leaving charging after Emma on the night she died. It leads to a heated exchange, with Zoe Buckingham (Kiara Barnes) taking a stand. Here’s what’s coming up on B&B in the weeks ahead.

It all starts when Charlie Webber (Dick Christie) reviews the security footage and sees Thomas chasing after Emma on the night she died. This little tidbit convinces Xander that Thomas murdered Emma and he needs to go down for it.

Bold And The Beautiful Spoilers – Xander Knows Thomas Is To Blame

Xander goes to Zoe with his suspicions and she tries to put an end to him going to anyone else about his findings. Bold and the Beautiful spoilers state that Emma will tell him that they shouldn’t jump to conclusions on this because it may not be as it appears. She thinks Thomas is a jerk, but he doesn’t seem like a murderer!

The Bold and the Beautiful spoilers tease that Xander doesn’t care if Zoe doesn’t believe his spiel about Thomas being a murderer, he knows it’s true and he refuses to stay quiet about it.

Xander decides that he needs to look at Thomas car as he thinks it will have key evidence that could prove he murdered the Forrester Creations intern. Xander gets access to his car and he finds damning evidence.

B&B spoilers say that Xander takes the evidence to Zoe, and he tries to convince her to turn on Thomas and reveal the truth about Beth being alive to Hope Logan (Annika Noelle).

Bold And The Beautiful Spoilers – Xander And Thomas’ Shocking Showdown

It leads to a confrontation between Xander and Zoe. She doesn’t think they should expose Thomas as he is unstable. He decides to confront Thomas and let him know he knows he murdered Emma and he isn’t going to let him get away with it.

What happens next changes everything between Thomas, Zoe, and Xander.

The Bold and the Beautiful Spoilers: Reese May Be Greatest Threat To Thomas’ Plans