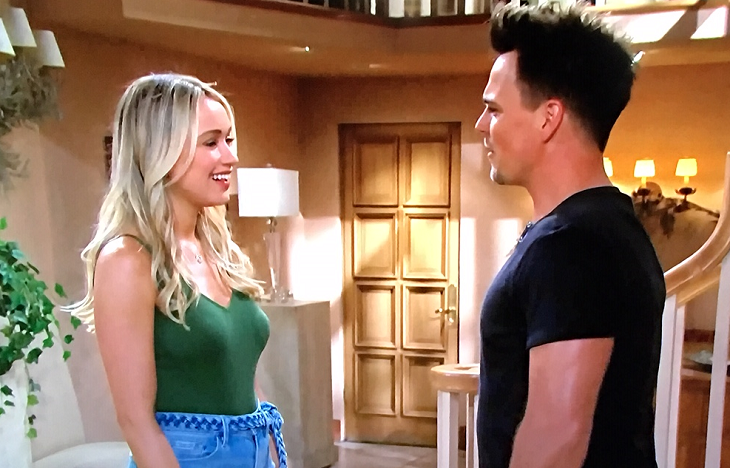 Flo Fulton (Katrina Bowden) has become a Logan on ‘The Bold and the Beautiful’. Along with that, she’s regained a chance to have a relationship with her seemingly lost high school sweetheart. But Wyatt Spencer (Darin Brooks) has no idea that he’s actually along for a short ride on B&B.

In recent weeks Wyatt has been chiding Sally Spectra (Courtney Hope) in front of Flo Fulton-Logan. He arguably overreacted to information that Sally didn’t relay to him about Thomas Forrester’s (Matthew Atkinson) intentions toward Hope Spencer (Annika Noelle).

B&B fans know how the adult Spencer brother’s are. Skin rubbed thin by far too much grating Bill Spencer (Don Diamont) applied to his son’s psyche’s in past years. So Wyatt is hardly a bad guy. Like his brother Liam (Scott Clifton), he’s simply sensitive due to life’s experiences.

Nevertheless, from Wyatt’s point of view, Sally should have told him about Thomas because Liam’s world is directly impacted. The instant Wyatt learned from Sally about Thomas he quickly filled Liam in. All of the preceding resulted in the likable ‘Wally’ being ditched by Wyatt, which actually was a big mistake.

Flo is the recipient of Sally’s cast off. Yet total chaos will ensue when the Beth Spencer (Madeline Valdez and River Davidson) reveal happens. So Wyatt’s pop-off’s about Sally might come to be seen, upon serious self-reflection, as nothing meaningful when compared to the actual lies Flo is forwarding.

The article headline’s drive reference is a plot wink, as hardcore B&B fans know. Flo took at least some of the fifty thousand dollars Reese Buckingham (Wayne Brady) gave her as a thank you for posing as a birth mother and bought a fancy late model car, which Wyatt recently complimented.

Bold And The Beautiful Spoilers – Sale Of Lope’s First-Born

Her earlier, foolish, free will act enabled the doctor to perpetrate a farce that wasn’t worth all the money in the world.

Reese’s sale of ‘Lope’s’ first-born child, who he said was stillborn, when Beth absolutely was not, is a crime. Flo is a knowing accomplice, living a good, but fully false life, that currently encapsulates Wyatt.

Bold and the Beautiful Spoilers: Hope Pushing Steffy To The Brink, Will She Take Liam Back? https://t.co/M0P90LFdJo pic.twitter.com/nEdDlitSzN

While Sally’s misstep was not intended as dastardly, Flo’s actions were and remain reprehensible. That’s why Wyatt is along for a ride, as he’ll come to find out soon enough.

Young And The Restless Spoilers: Rey Spies On Adam And Sees Him Making Out With Sharon

General Hospital Spoilers: ‘Lante’ Story Not Over – Their Love Tested, Can Lulu Ever Forgive Dante?