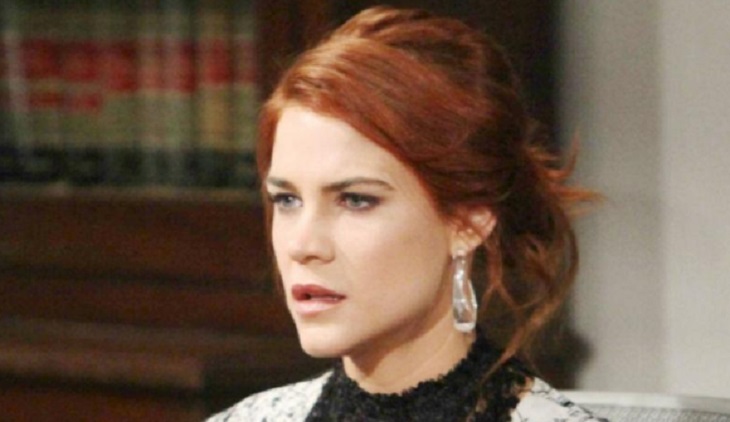 The Bold and the Beautiful rumors indicate that Sally (Courtney Hope) may be leaving Forrester Creations to restart her fashion house.

When Sally came to Los Angeles, it was revealed that she was the great-niece of Sally Spectra (Darlene Conley). Like her famous aunt, Sally wanted to create her own fashion line. With the help of her grandmother and friends, Sally relaunched Spectra Fashions.

Yet, Sally’s attempt at carrying on her aunt’s legacy were thwarted by Bill Spencer (Don Diamont), who wanted Sally to fail so he could secure her building. After her building was destroyed after Bill blew it up, Sally tried to continue her fashion career, but faced financial trouble.

The Bold and the Beautiful Spoilers Wednesday, January 16: Steffy Moves Forward With Adoption, Bill And Katie Get Closer

Her luck changed when she met Wyatt (Darin Brooks). Not only did Sally find love after having her heart broken by Thomas (Pierson Fode), but she also landed a job as a designer for Forrester Creations.

Things are content in Sally’s life, but a new shakeup may have her career going in a different direction.

Rumors are that Sally wants to restart Spectra Fashions, and Wyatt’s going to help her achieve her dream.

Wyatt will seek his father’s assistance in securing the property and the funding to help Sally rebuild her fashion empire. Given Bill’s new outlook on life following his shooting, he’ll want to make amends with Sally.

With Sally wanting to break out on her own again, could we see more battles between Spectra Fashions and Forrester Creations?

Bold And The Beautiful Spoilers – Time For Another Fashion Rivalry

The Forresters battle with rival fashion houses was one of the things that made B&B a must-watch soap opera. While viewers didn’t care for the new Spectra gang, seeing a rivalry on the runway between the two fashion empires was interesting.

With Sally possibly leaving to start her own company, she could persuade some of the Forrester employees to come with her, which will once again renew the longstanding rivalry between the two families.

Do you think Sally will relaunch Spectra Fashions? Or do you want her to stay at Forrester Creations

Days of Our Lives Spoilers: Sarah Blasted for Betraying Eric