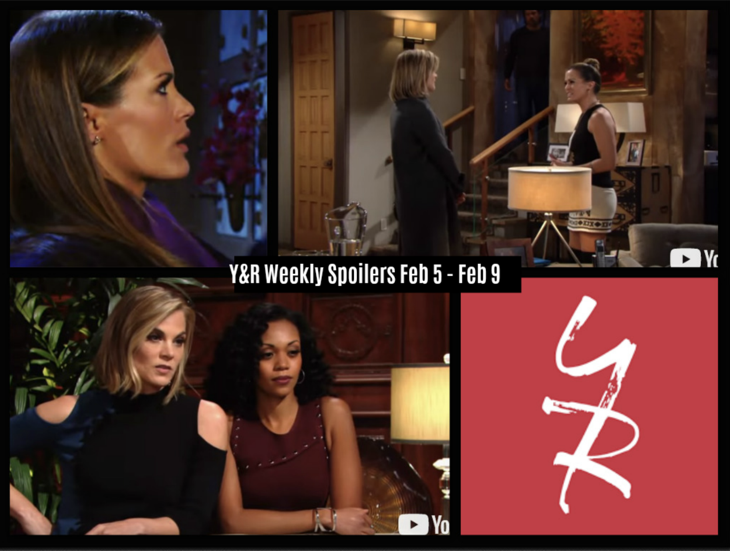 “The Young and the Restless” (YR) spoilers for the week of Monday, February 5th through Friday, February 9th tease that “This week her past will finally bring her down.” The her is referring to Chelsea Newman (Melissa Egan) and all her secrets are about to come out of the closet. It’s going to be a very exciting and drama filled week. You will not want to miss a moment of the action!

In the newest CBS “The Young and the Restless” video promo we see Chelsea Newman asking Phyllis Summers (Gina Tognoni) if she came to accuse her of stealing from her own company. Sharon Newman (Sharon Case) is going to let the cat out of the bag about Nick Newman (Joshua Morrow) finding $250,000 in Chelsea’s bathroom wall. This is going to make Phyllis very suspicious and she will start digging for the truth especially after they have a meeting and Chelsea is acting very odd. Phyllis will warn Nick about Chelsea.

Chelsea Gets A Disturbing Message

To make matters worse Chelsea will receive a cryptic text asking her if she had a nice visit with Christian’s real father. So it appears someone knows about the paternity, but who? Or do you Y&R fans think Victor Newman (Eric Braeden) could be behind the text since he already knows about the true paternity.

Elsewhere, Victoria Newman (Amelia Heinle) and Ashley Abbott (Eileen Davidson) will go head to head this week. Victoria will hear Ashley grilling Abby Newman (Melissa Ordway) about the company in which she will confront her. Victoria knows that Abby has an alliance with her mother and if she can keep Abby busy in Paris it will benefit her. Victoria will become annoyed with Ashley and decides it’s time for her to go from Newman even if she has to take drastic measures to get her out. Do you think Ashley is overstepping?

Other “Young and Restless” spoilers suggest that Mariah Copeland (Camryn Grimes) will convince Nick Newman to help out Tessa Porter (Cait Fairbanks) after she learns that she is homeless and staying at the office. Also this week, Billy Abbott (Jason Thompson) will try to play peacemaker between his brother Jack Abbott (Peter Bergman) and sister Ashley Abbott. So we have a very eventful week coming up, make sure to stay tuned to CBS’s “The Young and the Restless.”