The Young and The Restless Spoilers: The Week Ahead – Shocks, Showdowns, Tension & Returns From The Dead 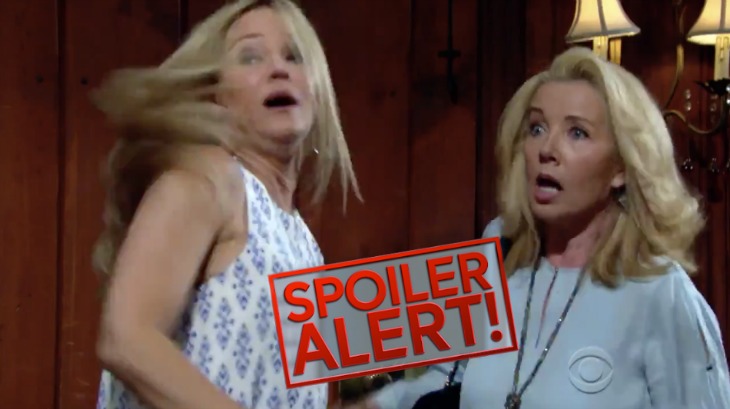 The Young and the Restless spoilers tease that Jill (Jess Walton) is about to get quite a shock! Jill will find herself in the middle of all the chaos involving JT (Thad Luckinbill) and his mysterious whereabouts. This is not the welcome home that she was looking forward to.

It all begins when tensions run high between Nikki, (Melody Thomas Scott) Phyllis, (Gina Tognoni) Sharon (Sharon Case) and Victoria, (Amelia Heinle) especially as they realize that the body they buried a few weeks ago might not be dead after all. This is because JT has been wandering out and about in Genoa City, leaving all four ladies not only confused, but worried about their futures. There’s a very good chance that someone might end up cracking and eventually, tell the truth. Will it be Nikki? Or maybe Sharon, since she has so much to lose right now?

Meanwhile, Victor (Eric Braeden) receives a mysterious message. He believes that it might be from JT, as someone has apparently been trying to sabotage Newman Enterprises all week now. Soon enough, this will force him into a showdown, but with who, know one knows yet.

Elsewhere, Nick (Joshua Morrow) and Sharon are preparing for their future together, even though Sharon does have some troubling things in the back of her mind. Billy (Jason Thompson) feels as though he is playing with fire once again as he covers for Summer. (Hunter King) Also, Kyle (Michael Mealor) realizes that he might have gotten in over his head again.

Of course, fans will just have to tune in to find out what will happen next! The Young and the Restless airs weekdays on the CBS network. Check your local listings for times. In the meantime, drop us a line with your thoughts in our comments section below. And as always, don’t forget to check back with Soap Opera Spy for all the latest news, updates and spoilers on The Young and the Restless and all of your favorite daytime television shows right here!

The Bold and the Beautiful Spoilers: Emma Meets Zoe, Xander’s Ex Has An Agenda