The Bold And The Beautiful RUMOR: Trouble In Paradise For Hope And Liam? 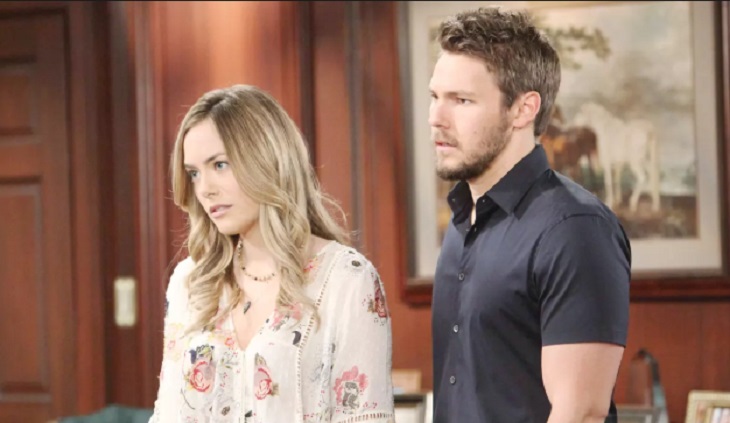 The Bold and the Beautiful spoilers indicate that newlyweds Hope (Annika Noelle) and Liam (Scott Clifton) may already be having marital problems, and the source of their trouble could be Liam’s newborn daughter Kelly.

As B&B fans know by now the ongoing triangle between Hope, Liam, and Steffy (Jacqueline MacInnes Wood) appears to have cooled down. Steffy broke up with Liam and decided to concentrate on becoming an independent woman by focusing on her career at Forrester Creations.

Liam then married Hope, and the three are trying to remain amicable adults since there are children involved in the situation. However, recent spoilers suggest that the situation may become more hectic for the trio.

This week Hope goes to the doctor for an ultrasound, yet her husband is nowhere to be found. Hope is upset that Liam couldn’t make the appointment and she’s even more displeased when she learns that Liam was with Kelly and Steffy.  To add insult to injury when the newlyweds to finally link up, Hope learns that Liam already knows her OBGYN since she was the same doctor that Steffy had a few weeks ago … awkward.

Since Liam’s attention to be focused on Kelly instead of their baby, this could cause some jealousy with Hope. With Hope wanting Liam to spend more time with her as they prepare for their upcoming arrival, this could lead to Liam being an absentee father with Kelly. Yet, this won’t set well with Steffy.

After their split, Steffy said she wanted Liam to be a part of daughter’s life. Yet, if Hope tries to interfere in Liam’s relationship with Kelly, Steffy is going to speak up. Add in animosity between the two women in the past along with Steffy being a new mother and things are going to get heated between Ms. Forrester and Mrs. Spencer.

As for Liam, he’s going to be stuck in the middle once again when he’s caught between being loyal to his new wife Hope or being a good dad to his daughter Kelly.

So it looks like this saga between the trio is far from over, and the ensuing drama is going to revolve around baby Kelly and Liam’s role as a father.

The Young and the Restless (YR) Spoilers: Tessa In Danger – Mariah Seeks Answers

Days Of Our Lives Spoilers: Who REALLY Shot Marlena?