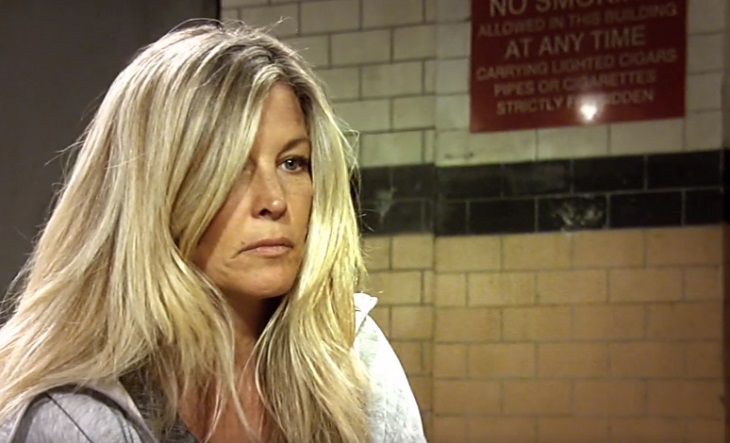 General Hospital spoilers tease that Carly is desperate to do just about anything to escape the living hell that is Ferncliff. As a matter of fact, it looks like her best friend Jason – and not her husband Sonny – will be the one who will come to her rescue.

It all beings with Sonny accusing District Attorney Margaux Dawson (played by Elizabeth Hendrickson) for putting his wife in the current hell hole that she’s in. Carly’s star in Ferncliff is not what she had in mind when Diane initially suggested that she plead guilty for reasons of insanity after she was accused of pushing Nelle down the stairs. Carly assumed that she would end up somewhere like Shadybrook, but that hasn’t been the case at all.

Sure, Sonny wants to see Carly out, but he’s got other matters going on in his life. He is totally distracted with all of the problems he’s dealing with, which also includes his ailing father, Mike.

That’s why Jason Morgan is stepping up to the plate. He’s taken a job as a janitor at Ferncliff in order to keep a watchful eye on Carly. Jason knows that just yelling at the DA is not going to help Carly get out. But at the same time he might be risking his own life by trying to help Carly. Will they manage a great escape just in the nick of time? Fans will find out soon enough!

General Hospital airs every weekday on the ABC network. You’ll have to check your local listings for times. Let us know what you think by leaving us a line with your thoughts in our comments section below.

Days Of Our Lives Spoilers: Marlena and John’s Wedding Of The Year!