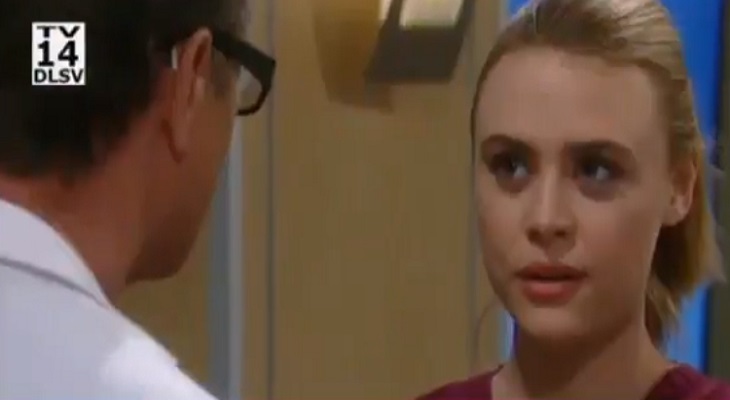 General Hospital spoilers for Tuesday, March 20, reveals, Kiki Jerome (Hayley Erin) may be in some serious trouble.  Dr. David Bensch (James DePaiva) meets up with Kiki and invites her into his office.  He tells her they can “talk” in private.  Kiki appears a little reluctant.

General Hospital spoilers also hint Dante Falconeri (Dominic Zamprogna) is torn between his wife Lulu (Emme Rylan) and what she did to her best friend Maxie West (Kristen Storms). Will this drive a wedge between husband and wife?

Other General Hospital spoilers show Curtis Ashford (Donnell Turner) is caught off guard. Drew Cain (Billy Miller) and Franco Baldwin (Roger Howarth) are missing.  Perhaps Curtis is onto something, he remarks “I got you, you crooked SOB.”

As Jim Harvey (Greg Evigan) insists that someone “get this done.” Time is running out for the two men trapped in the basement of a building that is about to be demolished. Meanwhile, Franco seems resigned to their fate as he tells Drew that “Harvey is trying to kill us.”

General Hospital’s Jordan Ashford (Vinessa Antoine) receives a call, and the person she hopes he finds what he is looking for. General Hospital Spoilers indicate Jordan and Curtis team up to ‘get’ Harvey. Could Curtis be in trouble?

General Hospital spoilers tease Sam Cain (Kelly Monaco) catches a break. Sam and Elizabeth Webber (Rebecca Herbst) have teamed up to find Drew and Franco. Sam Promises Elizabeth she will not let Harvey out her sight until she knows what he did to the two men. Sam has found Drew’s wedding ring and is certain Harvey has Drew and Franco and means to kill them.

General Hospital spoilers state Dr. Griffin Munro (Matt Cohen) offers his advice. Sonny Corinthos (Maurice Benard) sits in the doctor’s office with his dad Mike Corbin (Max Gail) and is surprised to find out there may be a treatment for him.  Sonny asks, “Are you saying there’s a treatment?”  Is Griffin suggesting that Andre Maddox’s (Anthony Montgomery) mind mapping may be a possibility?