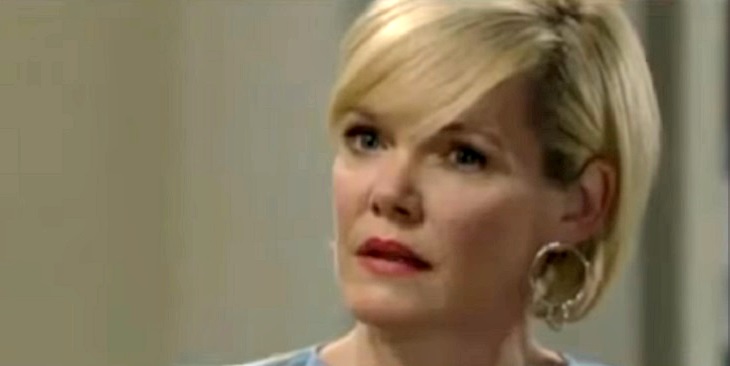 “General Hospital” spoilers for Thursday, May 31, tease that Dr. Bensch (James DePaiva) will catch Ava (Maura West) off guard. He’ll suddenly appear and suggest he was hoping to pick up something beautiful tonight. Dr. Bensch still seems convinced he can beckon Kiki (Haley Erin) to his bedroom, so he might hope to have a present waiting for her.

The creepy doc may unsettle Ava, but she’ll have no idea that her own daughter is his target. Fortunately, Kiki’s about to take action. She’ll file a complaint against Dr. Bensch with Liz (Rebecca Herbst) by her side. The GH board will review Kiki’s accusations, but there could be a big problem. Dr. Bensch has some ammo against Kiki since he saved her misleading voicemail.

Kiki’s one-night stand with Griffin (Matt Cohen) could come into play, too. There’s plenty of drama ahead, so stay tuned for all the complications. Elsewhere, Drew (Billy Miller) will meet with Andre (Anthony Montgomery) to discuss the procedure agreement. When Andre senses some doubts, he’ll ask if Drew’s reconsidered. Andre will certainly hope that Drew comes to his senses and backs out.

However, Drew will probably stand his ground. He wants to free his mind of Jason’s (Steve Burton) memories and this procedure is the only way to make it happen. Over with Sam (Kelly Monaco), she’ll try to minimize the risks with Jason’s help. Sam will want to get Peter (Wes Ramsey) out of lockup and secure the flash drive ASAP.

Those memories will give Drew a better shot of avoiding brain damage, so this mission is critical. In the meantime, Peter will rip into Valentin (James Patrick Stuart). He’ll do it from behind bars, which is good since he’s so full of rage. Peter will feel like Valentin’s lucky that he can’t physically attack him.

Other “General Hospital” spoilers say Liesl (Kathleen Gati) will lash out at Anna (Finola Hughes). She’ll twist the facts and suggest that Anna’s the reason Nathan (Ryan Paevey) died. Anna will be stunned by Dr. O’s outburst. She may admit that she made major mistakes, but she’s not the one who pumped a bullet in Nathan. Faison’s (Anders Hove) the crazy monster who actually pulled the trigger.

It looks like “General Hospital” has another great episode in store. We’ll give you updates as other news and rumors emerge. Stick with ABC’s GH and don’t forget to check CDL often for the latest “General Hospital” spoilers, rumors, updates and news.

The Young and the Restless RECAP Wednesday, May 30: Jack Tries To Drink His Sorrows Away, Feels Betrayed