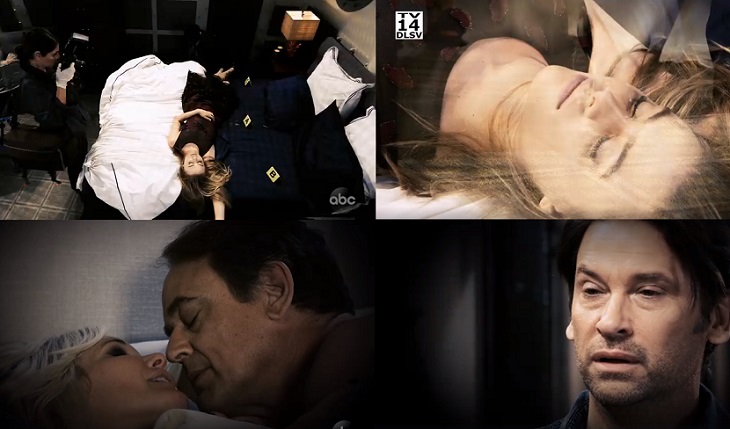 General Hospital spoilers tease that a devastating death will rock Port Charles this week on the ABC soap opera.  Rumors have been swirling for months that Hayley Erin would be leaving General Hospital, and spoilers indicate that her character Kiki Jerome has met her demise.

A heartbreaking new General Hospital spoiler video teases, “One event will change a town forever,” as a distraught Jordan Ashford calls to report a homicide, while still in her wedding dress.  Naturally, Kiki’s loved ones are rocked to the core by her seemingly meaningless death.

Griffin Munro [Matt Cohen] and father figure Franco [Roger Howarth] brak down in tears upon learning Kiki is dead.  It looks like the PCPD will have to work hard to locate Ava Jerome, seeing as how she is in bed with killer Ryan Chamberlain [Jon Lindstrom] when Kiki’s body is discovered.

Are you shocked to see Kiki dead?  Will Griffin, Franco, or Ava avenge her death?  How long before someone puts the pieces together and realizes Kevin/Ryan is a serial killer?

General Hospital Spoilers – Will Kim Dump Julian and Drive Him Back To Alexis – A ‘Julexis’ Revival?