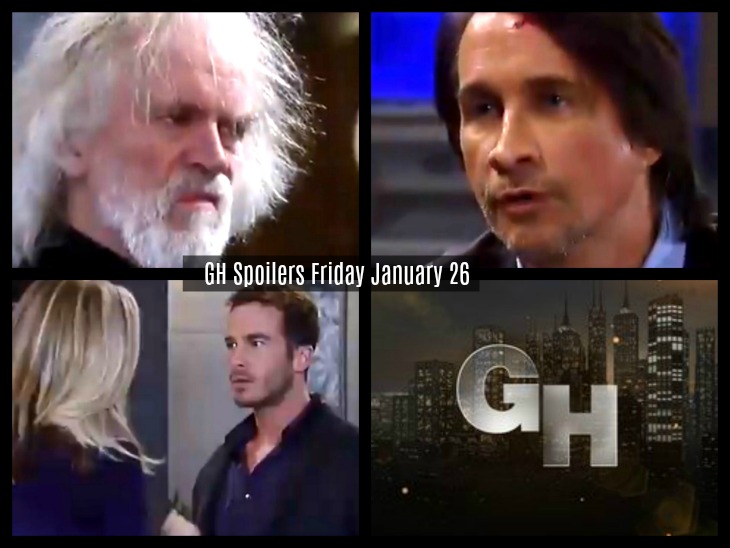 General Hospital (GH) spoilers for Friday, January 26, 2018 show panic is slowly taking over Port Charles as the news that a mad man is on the loose. Some are are too involved, while others rush to the rescue. Friday’s episode will be the cliffhanger, every GH fan will want to see!

General Hospital spoilers reveal a trapped Lulu Falconeri (Emme Rylan) begins to panic and scream for help from anybody out there. Dr. Liesl Obrecht (Kathleen Gati) is holding a napkin and appears to be defeated from whatever substance Faison had released from the canister in the room.

Will someone find the trapped women before it is too late, as Peter August (Wes Ramsay) was the only one who knew that Lulu was going to Spoon Island to investigate where Faison could be hiding and now Peter is being held at gun point along with Maxie Jones (Kirsten Storms), trying to survive Faison’s terror at his office at Aurora Media.

PCPD Detective Dante Falconeri (Dominic Zamprogna) finds his boss, Police Commissioner, Jordan Ashford (Vinessa Antoine), in the halls of General Hospital, and informs her that Cesar Faison (Anders Hove) is loose in Port Charles; as it has been confirmed that he left WSB Agent Anna Devane’s (Finola Hughes) house about an hour ago.

GH sources tease a glimpse of a very angry Faison and then we hear a gun shot and a shriek. At the Metro Court restaurant, owner, Carly Corinthos (Laura Wright) tells her brother, Dr. Lucas Jones (Ryan Carnes) that she believes a shooting just happened upstairs at the Crimson Magazine floor.

WATCH: Faison sees nothing but opportunity when it comes to Finn. #GH pic.twitter.com/vKXXESl9Mo

Jason Morgan (Steve Burton) receives a mysterious phone call, with a concerned look on his face, he takes off running saying, “I’m on my way!” Who is Jason off to rescue?

Be sure to tune into ABC’s General Hospital (GH) to catch up on all these exciting stories happening right now in Port Charles and so much more. Check Soap Oepra Spy often for updates, news, rumors and spoilers!