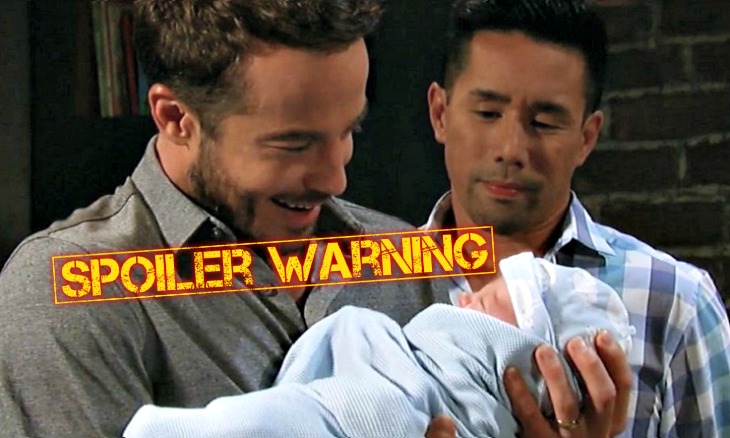 General Hospital spoilers indicate that Brad (Parry Shen) and Lucas (Ryan Carnes) will soon be knee-deep in some major Baby Wiley custody drama. Even though Wiley’s biological mother is a no-show at the custody hearing, that doesn’t mean their problems are over. Instead, they’ve only just begun.

According to ABC Soaps in Depth, “Brad is still keeping a huge secret from his partner, Lucas. He’s the only person that knows the truth about the real baby Wiley: the little boy passed away. His portrayer, Parry Shen, told the publication, “Brad is extremely relieved and astonished at having dodged a bullet. He’s relieved that he no longer has to worry about the 30 days looking over their heads.”

Brad and Lucas ready themselves for the outcome of their custody battle with Wiley’s birth mother. An emotional, new #GH STARTS NOW on ABC! #GH55 pic.twitter.com/DZ2EPVIUyz

The judge officially rules that Lucas and Brad are the legal parents of the young tot. The two men experience both disbelief and concern in the moment. After all, they’ve had to overcome one huge hurdle after another. They also know there are plenty of loopholes that may blindside them in the future.

To complicate matters even more, Brad knows that there’s a third party that may have something to do with the birth mom’s reversal: Julian. Perry added, “Brad isn’t naïve enough in this instance to believe in coincidences and luck. But he sought out Julian’s help for a reason and is relieved it paid off. And as long as no one got physically hurt, Brad doesn’t want to know the specifics.”

His actions may come back to haunt him, though! General Hospital airs weekdays on the ABC network. Check your local listings for times. In the meantime, drop us a line with your thoughts in our comments section below.

The Young and The Restless FALL Preview: Devon Torn – Billy’s Life Out Of Control – Ashley Wants To Take Over