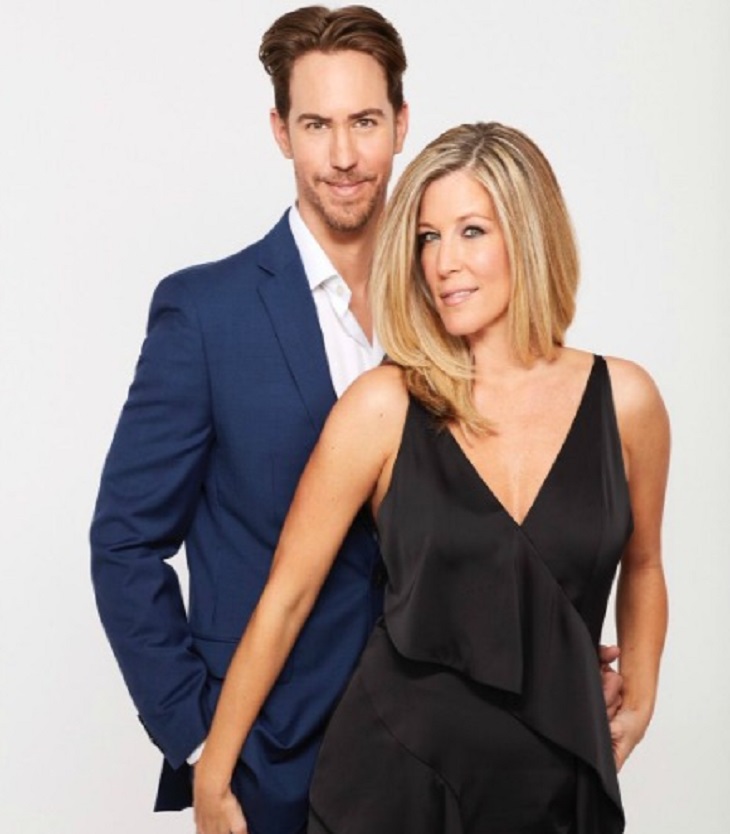 General Hospital fans can’t help but wonder if there is an on screen romance brewing between two of their favorite characters, Carly Corinthos [Laura Wright] and Peter August [Wes Ramsey]. Of course, that seems almost impossible as Carly has long been with Port Charles mob boss Sonny, but a new promo pic between the two look like they might be getting a little too close for comfort.

General Hospital fans already know that actors Wes Ramsey and Laura Wright are already real-life loves. Still, their promotional stills are causing quite a stir between soap fans on line. In one photo, Carly clearly has her hands on Peter’s legs while Peter is holding on to the blonde beauty by her hip.

Of course, this might just be another case of fans reading way too much into this, but at the same time there’s a good chance that something might be brewing between the two characters after all.

When Wes first scored his role as Peter August, many critics believed that Laura Wright might have had something to do with it. So could she be encouraging General Hospital writers to develop a new romance between Carly and Peter for the future?

It would definitely be a hot romance that would get plenty of people in trouble. There’s no denying that both Carly and Peter make a good-looking couple, both on and off screen. Fans will just have to tune in to find out what will happen next!

In the meantime, General Hospital airs weekdays on the ABC network. Check your local listings for times. Also, drop us a line with your thoughts in our comments section below. And as always, don’t forget to check back with Soap Opera Spy for all the latest news, updates and spoilers on General Hospital and all of your favorite daytime television shows right here!

The Bold and the Beautiful Spoilers: Is Liam REALLY The Father Of Steffy’s Baby?