General Hospital Poll: Who Is Sam’s Soulmate? Jason or Drew? 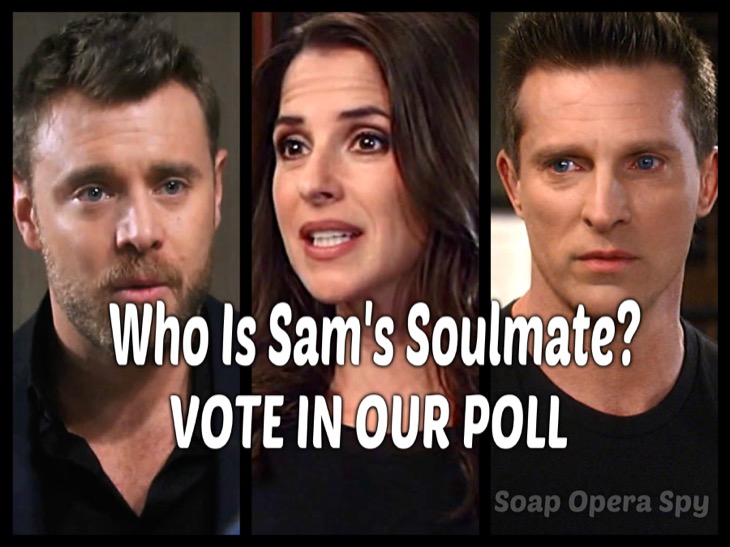 General Hospital’s Sam Morgan is now Sam Cain (Kelly Monaco). She has decided that Drew Cain (Billy Miller) is the man she wants to be with, her true love and soul mate. The verdict is not in yet as there are fans on each side of the issue.

Some believe Sam should be with General Hospital’s Jason Morgan (Steve Burton) and remember their sweet love affair and their wedding back in 2011. Sam and Jason had just renewed their relationship when tragedy struck on the night they decided to be a family and Sam moved back in with Jason and Danny (Jaxon/Jakob Kring).

Sam was crushed until Jake Doe (Billy Miller) showed up in Port Charles and General Hospital’s Carly Corinthos (Laura Wright) proved, through a DNA test, that he was, in fact, Jason back from the dead. They renewed their love, but Sam always knew that something had changed about Jason; he was different from the man she loved. She chalked it up to time and eventually came to love the change and decided she was ready to settle down to life without the mob violence.

As it turned out, General Hospital revealed, the man she thought was her husband was really Drew Cain, Jason’s twin brother who had his brothers’ memories mind mapped over his own. General Hospital sources say some fans think Sam is living in denial ; remember her and Jason’s New Years Eve kiss and the fact that she has kept this from Drew.

Other fans say Drew cannot possibly love Sam because he is acting on Jason’s memories of her and not his own. Still, other fans believe Drew is right for an older more settled Sam and he is the safer choice and her true soul mate. Sam has made her choice and she believes it is the right one.

Could she be in denial? So, who do you say is Sam’s soulmate; General Hospital’s Drew Cain or Jason Morgan? You decide and please be sure to vote in our SOS poll.

The Young and the Restless (YR) Spoilers: Jack and Victoria Underestimate Victor – Ashley’s Targeting is Reckless

Pierson Fode Headed Back To The Bold and The Beautiful? Spotted On B&B Set!