General Hospital POLL: What Was the Best GH Storyline of 2017? 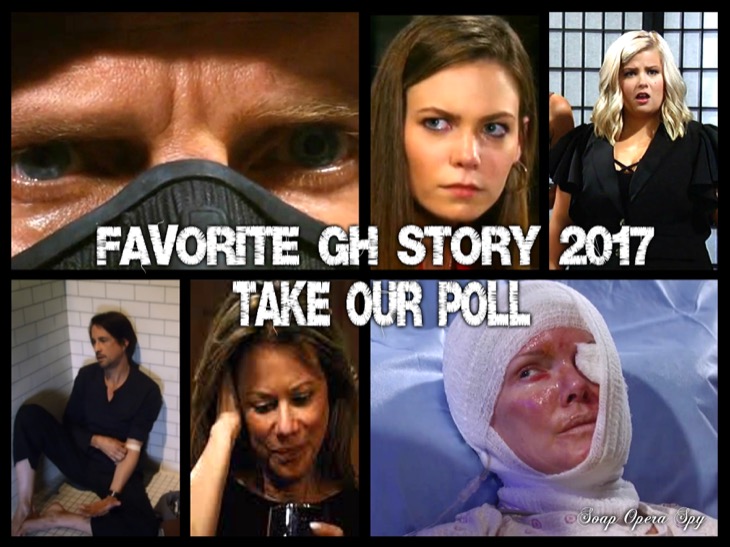 As 2017 comes to a close, Soap Opera Spy would like to know what was your favorite General Hospital storyline for 2017? Please vote and let us know what you think!

Dr. Hamilton Finn (Michael Easton) ended up admitting he was addicted to Zen-Zen, which at first seemed like a ridiculous story as Hayden Barnes (Rebecca Budig) literally taped him to a chair in his hotel suite to detox him; but it led them to am epic romance that unfolded before our very eyes. Ultimately, Hayden left Port Charles, and we miss her character deeply, but their romance was sweet while it lasted, no?

Related: General Hospital Spoilers: Franco Tormented By His Past, Headed Down A Dark Path – Did Betsy Lie?

Nelle Hayes (Chloe Lanier) came clean at the beginning of March, and revealed she was actually Carly Corinthos’ (Laura Wright) adopted sister. People loathed Nelle for drugging Sonny Corinthos (Maurice Benard) while he mourned for his son, Morgan (Bryan Craig), making him believe he slept with her, while married to Carly. Does anyone have a sense of deja vu? Nelle is currently pregnant, claiming the baby to be Michael Corinthos’ (Chad Duell) and one can’t help but see the similarities between Nelle and a younger Carly. Carly has been redeemed for all of her misdeeds of the past and are GH fans not enjoying karma being served on a diamond crusted platter to Carly?

General Hospital took a great hit when Jane Elliot retired as Tracy Quartermaine. How do you feel about her last trek around the globe searching for that painting that her father had? The story seemed to drag on and lead to nowhere but the ending was epic and all diehard GH fans were thrilled to see that she ended up being whisked away by none other than her love, Luke Spencer (Anthony Geary).

Ava Jerome (Maura West) setting her warehouse on fire to prevent Sonny and Carly from forcing her to deal with what she had done to Morgan was outrageous. She ended up badly burned, but didn’t gain much sympathy since she did it to herself; although she did manage to corrupt a saintly doctor, who battled his priestly vows, ultimately giving them up to be with her! Is Griffin going to be able to help Ava redeem herself or will she return to her old ways and sabotage any good she has going in her life?

Alexis Davis’ (Nancy Lee Grahn) alcoholism came on very suddenly, and seemed to vanish into thin air. Although most viewers of the ABC soap opera couldn’t blame her for becoming a raging alcoholic; many didn’t understand how it came on so quickly. The story was told very carelessly, but honestly, who didn’t have sympathy for her after what Julian Jerome (William deVry) and his sister, Olivia (Tonja Walker) had put her through?

GH Nurse, Amy Driscoll (Risa Dorken) was desperate to help her brother Chet (Chris Van Etten); and when she dragged Nathan West (Ryan Paevey) into her “Ask Man Landers” scheme, we were not sure how it was going to turn out. The story seemed to drag out, and when everything looked like it was going to blow up in their faces, it somehow turned out okay. The best part of it all, was that Damian Spinelli (Bradford Anderson) returned and anytime he plays a part of something GH fans are delighted!

General Hospital’s biggest story of the year, had to be the return of Steve Burton’s character Jason Morgan; but is it the BEST storyline? Between him and Drew Cain (Billy Miller) being twins, and Sam Morgan (Kelly Monaco) being in love with Drew, do you enjoy what is happening with them right now? Drew is struggling to regain his own memories and have his own identity; while he faces the fact that he has a teenage son with another woman. It looks like there will be a long and interesting road ahead for the brothers, as they will fight for their own path in life and seek answers for their missing years and memories!

Which storyline do you think is the best one of 2017? Please vote and let us know what you think! Be sure to tune into ABC’s General Hospital (GH) and catch up on everything happening right now in Port Charles. Check Soap Opera Spy often for updates, news, rumors and spoilers!

The Young and the Restless (YR) Spoilers: Abby Fights For Her Man – Sharon is Second Best