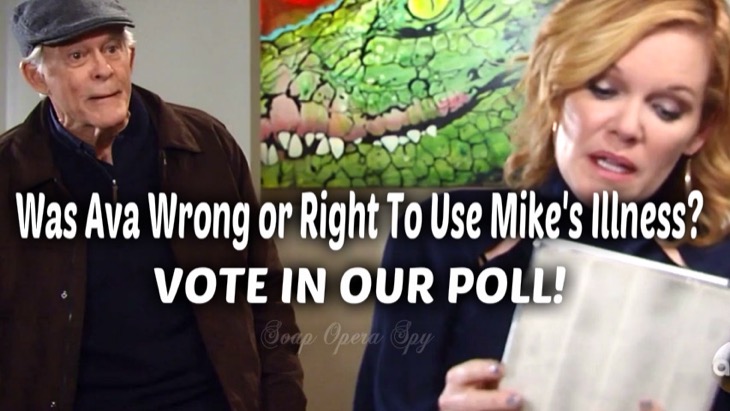 Many General Hospital fans see Ava’s act as despicable; using such a serious illness as a bargaining chip. Fans say they are not surprised as this is the kind of person she is. Her oldest daughter, General Hospital Kiki Jerome (Hayley Erin) was disgusted and even told her so; saying she had not changed and her behavior was comparable to how she used Morgan Corinthos (Bryan Craig) mental illness against him by switching out his Bipolar meds; contributing to his tragic death. General Hospital Griffin Munro (Matt Cohen) was very happy for her, however, fans are eager for him to find out just how Ava was able to convince Sonny to allow Avery to sleep over. General Hospital fans also question why Ava would finally get a visit with her daughter then leave her with the nanny to go to Franco Baldwins (Roger Howarth) wedding.

Still, there are those General Hospital fans who say Ava has a right to see her daughter. Ava loves Avery and has been denied the opportunity to see her. They believe this visit is long overdue. Champions of Ava’s cause say any mother would have used this or any other opportunity to be able to spend time with their child; after all, both Sonny and Ava are mobsters, guilty of illegal doings and even murder. General Hospital fans who take Ava’s side say those who disagree with her actions are being hypercritical and bias because they do not like Ava, however, both parents have been guilty of being selfish when it comes to the care of this little girl.

What do you think, was it wrong of Ava to use Mike’s Alzheimer’s against Sonny to see Avery? You decided and please be sure to vote in our Soap Opera Spy Poll

The Bold and The Beautiful Breaking News: Don Diamont Treated For Back Trouble in USA – Returns To DWTS Italy