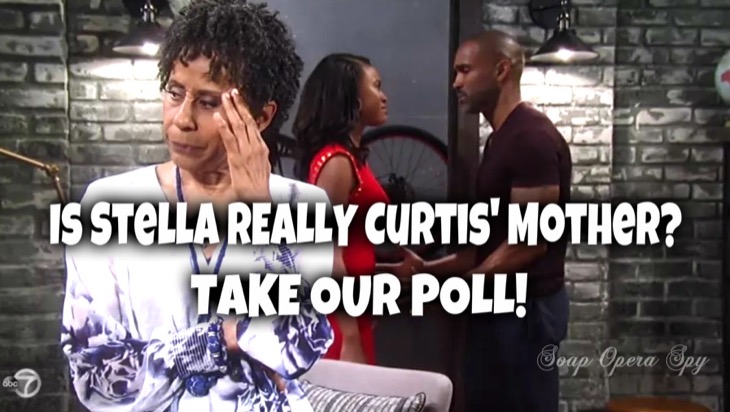 General Hospital Stella Henry (Vernee Watson), better known as Auntie Stella, came to Port Charles less than a year ago, but it seems as if she has always been around. Friend, Crusader, and protector of Charles street and family, one wonders why she never married or had children of her own. General Hospital sources say she gave up everything to help raise her sisters’ boys Curtis Ashford (Donnell Turner) and his brother Tommy.

Is there more to Aunt Stella than sweet potato pie and home cooked meals? General Hospital chatter speculates there may be more to Auntie’s mamma bear attitude towards her nephew Curtis. Stella never really talks about herself, but General Hospital rumors are flying that she could be keeping a secret that could blow up in her face and change the way T.J. Ashford (Tequan Richmond) and Curtis view her. General Hospital spoilers reveal Auntie Stella could very well be Curtis mother.

Aunt Stella never married or had any children of her own, yet she is very possessive with Curtis, some would say she acts just like his mother. Stella originally told Curtis she only intended to stay in Port Charles for a short while, but General Hospital sources hint she never intended to leave because she wanted to be closer to her son.

While Stella was in the hospital recovering from a minor stroke last year, she revealed some of her past to her nephew, telling him she decided not to marry her high school sweetheart because her sister was ill and needed help raising her boys. She may have been concealing her real reason for wanting to help. She could have been pregnant with Curtis but the shame of being an unwed mother led her to keep the secret all these years. Perhaps she harbors bad feelings for Jordan because she feels guilty about her own past. If the General Hospital rumors are true, she will have lots of explaining to do.

Perhaps if this secret comes to light Stella will have something in common with Jordan and they can become work on their relationship. Curtis and Jordan seem to be a solid couple and Stella will have to accept her as family sooner or later. General Hospital rumors tease someone in Port Charles may reveal her secret and change Stella’s life forever.

The Bold and The Beautiful Alum Winsor Harmon Arrested