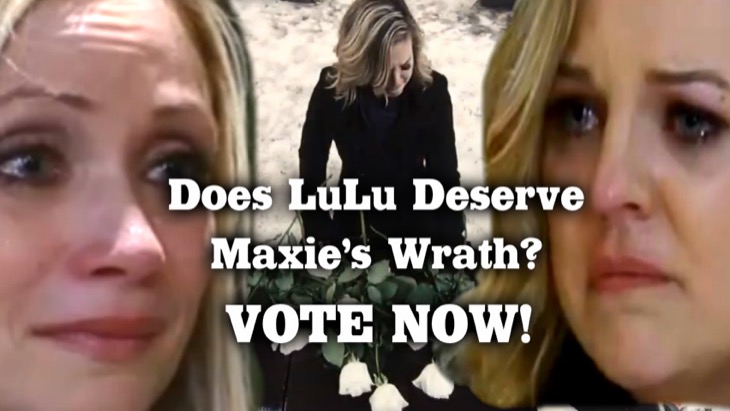 Now that General Hospital Maxie (Kirsten Storms) has buried her beloved husband Nathan (Ryan Paevey) the real nightmare begins. Lulu (Emme Rylan) tried to extend her support to her best Friend at the funeral however, Maxie was not having any of it. As a matter of fact, Maxie seems to be blaming Lulu for Nathan’s death. Does Lulu deserve Maxie’s wrath? Some fans say if Lulu had not been so selfish Nathan would still be alive.

She pushed Nathan to bring his estranged father Faison (Anders Hove) out of hiding for an interview. Her intentions were pure but that gives no comfort to Maxie who must raise their child alone. Some may even say, Nathan did not have to agree to give the interview; he did it of his own free will. Maxie will need her friends and family around her at this time and her best friend would be of great comfort.

Lulu and Maxie have had their ups and downs in the past. One can say that Maxie has done her share of hurt. She agreed to be Lulu’s surrogate but unfortunately, she miscarried the baby and never told Dante (Dominic Zamprogna) or Lulu. Instead, she slept with her good friend Spinelli (Bradford Anderson) and became pregnant with his baby. Her lies did find her out when she tried to pass the little girl off as Lulu’s and she eventually lost custody of her daughter. Lulu’s marriage with Dante broke up and their friendship seemed to be over. As time passed, Lulu was able to forgive her best friend and they have been close ever since.

Now that the General Hospital tables have turned, should Maxie forgive her best friend? Each one has caused pain in the others life at some point. As Maxie continues to place blame on Lulu, should Lulu back off and accept her part in Nathans death? Does she deserve Maxie’s anger? Remember, it was Faison who pulled the trigger. Or should Maxie understand that Lulu meant no harm and embrace their friendship.

Please vote in our SOS poll.  Also, don’t forget to check back with Soap Opera Spy for all the latest news, updates and spoilers on General Hospital and all of your favorite daytime television shows right here!

The Young and The Restless Casting Three New Characters – Do You Have What It Takes?