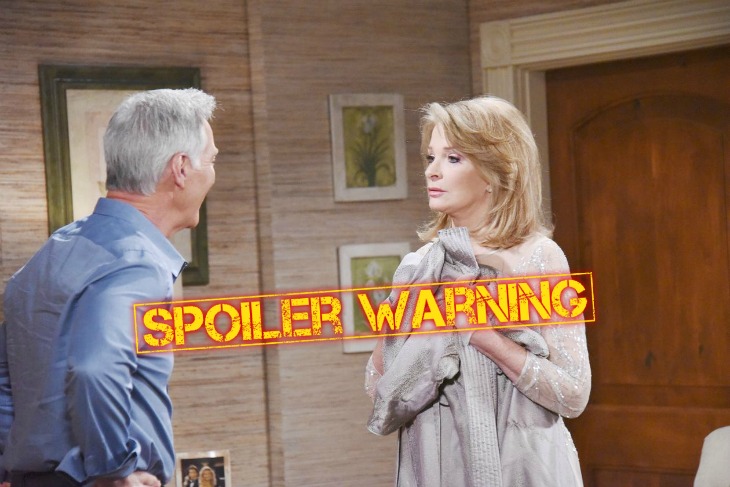 “Days of Our Lives” spoilers for week of August 6-10 tease that Marlena (Deidre Hall) will try to put her worries aside. Since Sami’s (Alison Sweeney) gone MIA, Marlena’s been a little upset lately. She’s naturally concerned about her daughter, but she’d also like a definite answer on the upcoming wedding. Sami still hasn’t RSVP’d, so Marlena will just have to wait and wonder if she’ll show up.

Of course, Marlena recently mentioned Kristen (Eileen Davidson) as well. She pointed out that the body was never recovered, but John (Drake Hogestyn) insisted there was no reason to fret. He’s convinced that Kristen is long gone and will never bother them again.

However, DOOL fans know John’s got it all wrong! Kristen made a brief appearance in Memphis during the mission to track down Will (Chandler Massey). It turns out she’ll be back in Salem before you know it, but she’ll be sporting a new look.

“Days” spoilers say Stacy Haiduk (ex-Patty from The Young and the Restless) will appear as a Kristen recast. Word has it both Kristen and Sami will make quite a splash at the nuptials. That’s why we’ll see an awful omen this week. When Marlena tries on her wedding dress, John will accidentally catch a glimpse of his bride-to-be.

“Days of Our Lives” spoilers state that Marlena will gasp and cover up with something. She’ll suggest that John can’t see her gown yet. John will struggle to tear his eyes off his lovely lady, but Marlena will maintain that it’s bad luck. She won’t want to add any hurdles to their big day. Marlena just wants a huge gathering with lots of love and no drama.

Unfortunately, Marlena won’t get her wish. “Days of Our Lives” spoilers say the ceremony will bring grave danger later this month. That wedding dress sighting is indeed a terrible sign. In the meantime, let’s talk about a DOOL love triangle. Ciara (Victoria Konefal) will move past her issues and heat things up with Tripp (Lucas Adams) this week. Nevertheless, she just can’t give him her whole heart.

In the latest #DAYS, Ben’s time with Ciara is interrupted when Hope and Rafe burst in.https://t.co/ZsCmioRrzb pic.twitter.com/f8Fo7zPneA

Ciara will also have a close (and clumsy) encounter with Ben (Robert Scott Wilson). They’ll bump into each other and get tangled up as they tumble. Ben is never far from Ciara’s thoughts and that trend will continue. She’s pretty smitten, so that could cause more problems with Tripp soon enough.

It sounds like some stunning moments are coming up on the NBC soap. We’ll give you updates as other “Days” news and rumors emerge. Stick with DOOL and don’t forget to check Soap Opera Spy often for the latest “Days of Our Lives” spoilers, rumors, updates and news.

The Young and The Restless Spoilers: Nick & Sharon Hiding Scandalous Secrets, Will They Tear Them Apart?