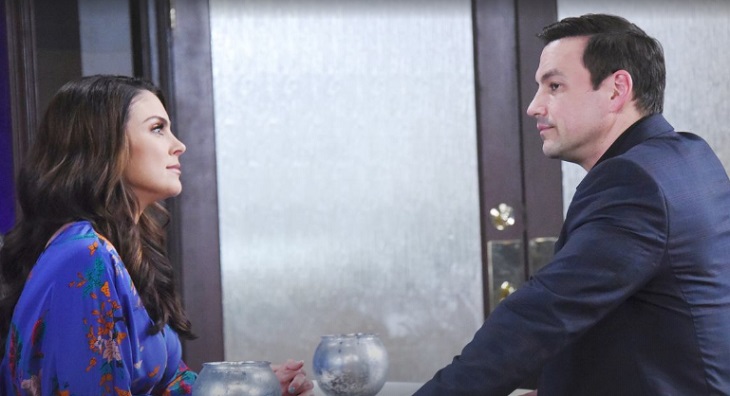 “Days of Our Lives” spoilers for Monday, August 6, tease that Steve (Stephen Nichols) will overhear something suspicious. As he listens in on Kayla (Mary Beth Evans) and Jennifer’s (Melissa Reeves) chat, he’ll realize he’s been kept in the dark. Steve won’t get the full scoop, but he’ll definitely know that Kayla’s keeping a secret from him.

DOOL fans can expect Steve to play it cool for a while. He won’t want to make a big scene and turn this into a major issue yet. Steve owes Kayla his sight, so he won’t want to hurl accusations or cause any unnecessary trouble. Instead, Steve will just let this secret simmer. He’ll mull over what Kayla might be hiding and hope it’s not as bad as he thinks.

Elsewhere, Chloe (Nadia Bjorlin) will also have a problem on her hands. She’ll open up to Eric (Greg Vaughan) about her tricky romance. “Days of Our Lives” spoilers say Chloe and Lucas (Bryan Dattilo) aren’t as solid as they seem. Perhaps Chloe just isn’t on the same page about this reunion. She may not feel the spark that Lucas feels, but she won’t want to hurt him.

Eric will listen to Chloe’s troubles and offer a little advice. He’ll undoubtedly encourage Chloe to spill her feelings to Lucas himself. Leaning on a friend is great, but it’s no substitute for being honest with her beau. Unfortunately, Lucas and Chloe’s relationship isn’t meant to last. It’s just a matter of how long they can make it work.

Other “Days of Our Lives” spoilers say Victor (John Aniston) will have some power. By keeping quiet about Eve’s (Kassie DePaiva) part in the drug scheme, Victor’s got serious dirt on her. He’ll assure Eve that her secret’s safe, but only if she does something in return. Victor will tell a nervous Eve what he wants and expect some speedy results.

Over with Ted (Gilles Marini), he’ll also have plenty of leverage. “Days” spoilers state that Will (Chandler Massey) and Sonny (Freddie Smith) will be blackmailed. They’ll have to obey Ted’s orders or else they’ll go down for Leo’s (Greg Rikaart) murder. Even though Leo’s death was really an accident, it sure wouldn’t look that way to the cops! Will and Sonny covered everything up to protect themselves.

That means the guys are stuck in quite a jam. When it comes to keeping Ted’s mouth shut, Sonny and Will are going to face some difficulties. We’ll give you updates as other “Days” news and rumors emerge. Stay tuned to DOOL and don’t forget to check Soap Opera Spy often for the latest “Days of Our Lives” spoilers, rumors, updates and news.