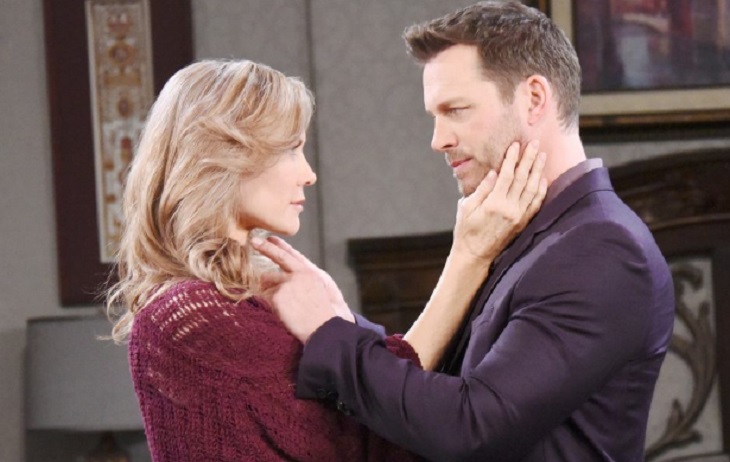 Days of Our Lives Wednesday October 3 recap begins with  Abby (Marci Miller) telling J.J. (Casey Moss) she thinks her alters are back.  J.J. tells Abby that taking a nap is no big deal.  Abby shows J.J. the text she sent Stefan (Tyler Christopher).

Abby Tell J.J. She Believes Her Alters Have Returned

Abby tells Chad (Billy Flynn) that Stefan showed up last night. Abby isn’t sure if Chad can handle the alters returning. Chad asks what Abby is talking about, she lies and says mustard on the sandwiches. Chad goes upstairs to get Thomas (Asher Morrissette).  J.J. asks if Abby if she should spend time with Chad.  Abby sends Chad and Thomas on the picnic alone.

J.J. tells Abby he knows this wasn’t easy for her.  Abby thinks she underestimated Gabby (Marci Miller).  J.J. tells Abby that she is distracted but now she can beat the alters this time. Abby believes she and Gabi (Camilla Banus) can work through this.  Chad tells Gabi that Abby bailed on the picnic for a checkup.  Gabi suggests it might be another doctor like a psychiatrist. Chad asks why Abby would need a shrink again.  Gabi tells Chad Abby doesn’t want to relapse.  Gabi tells Chad that Stefan (Tyler Christopher) thinks Gabby is back. Stefan shows up at Abby’s.

Stefan Is Catching Onto Gabi

Days of Our Lives’   Stefan questions if Gabby is trying to get back to him. Stefan covers telling Gabi he was dictating a test. Gabi wants to use Abby to help with a maternity line. Stefan tells Gabi that Abby invited him over last night. Gabi asks Stefan is he thinks Gabby is back. Stefan tells Gabi that Abby claimed she meant the text for J.J.  Gabi asks Stefan if he thinks Gabby is trying to come out.  Gabi questions why Stefan is acting all cool.  Gabi figures out that Stefan is staying away to keep Abby out of the hospital.  Gabi knows Abby is in trouble.  Stefan wants to know why Gabi is so interested in his.

Kristen Begs Brady To Leave With Her

Days of Our Lives Spoilers: Is Mimi Actually The Real Mom Of Bonnie’s Baby?

Days of Our Lives’ Hattie is up dancing when Sami walks in with her burger.  Sami asked what she is doing.  Hattie tries to explain her actions away.  Hattie tells Sami she should be happy since she shot her. Sami tells Hattie she is not Marlena.  Hattie tells Sami that she should have some respect.  Sami tells Hattie to show her the scar from the bullet wound.  Kayla (Mary Beth Evans) comes in as Sami is trying to see the scar.

Sami tells Kayla she isn’t going anywhere until she sees under that gown.  Sami starts shaking Hattie demanding to know where Marlena is.  Kayla gets Sami off of Hattie and tells her Marlena is ok and safe.  Kayla tells  Sami she has been in on this from the beginning.  Hattie tells Kayla that Sami is crazy.  Kayla tells Hattie that Marlena is awake, so her services are no longer necessary.