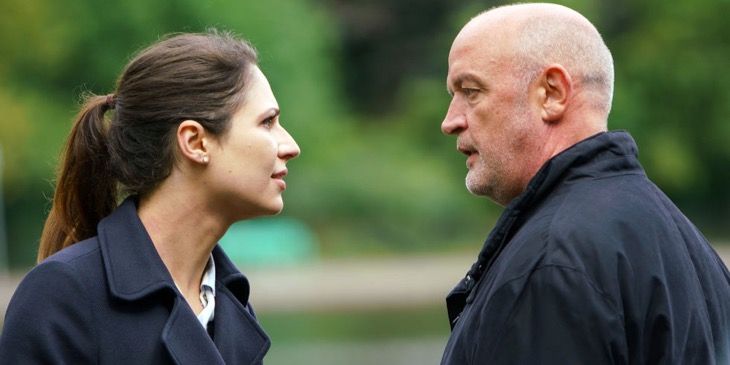 Coronation Street spoilers indicate that if there’s one person who can take deranged murderer Pat Phelan down, it’s his daughter, Nicola Rubinstein. But there’s a twist – Nicola is back in Weatherfield not to hunt her father down but to seek his forgiveness instead.

The last time viewers saw Nicola, she was shocked and appalled to find out that Pat Phelan had raped her mother and framed Anna Windass for Seb Franklin’s ladder accident. Pat is shocked to see that his daughter has returned home. She immediately apologizes to him for disbelieving him and asks for his forgiveness. She also tells Eileen she’s sorry for not sticking up for her father. Pat is absolutely thrilled to have his daughter back and even offers her a job as a site manager at the old mill, which just happens to be the same place that Andy Carver and Vinny Ashford’s bodies are buried.

And while Pat Phelan seems to be convinced that his daughter’s motives are pure, there’s a strong possibility that she might be hiding her true feelings from him. After all, Coronation Street fans know just how much Nicola hates her father. She made it no secret that she finds him disgusting when she found out the truth about him and her mother.

There’s also a chance that Nicola might have a secret plan to bring Pat Phelan down on her own. After all, if there’s one person who can do it, it’s Nicola Rubenstein. Pat Phelan’s daughter is his biggest weakness. Fans will just have to tune in to see what Nicola’s next move will be!

Coronation Street airs weeknights on the ITV network in Britain and is available on Britbox in the United States. Drop us a line with your thoughts in our comments section below. Also, don’t forget to check back with Soap Opera Spy for all the latest news, updates and spoilers on Coronation Street and all of your favorite British soaps right here!

The Young and the Restless Spoilers: Nick and Sharon To Give Their Marriage Another Chance?

EastEnders Spoilers: Phil Mitchell Cozies Up To Mel Owen, Desperate To Save Ben