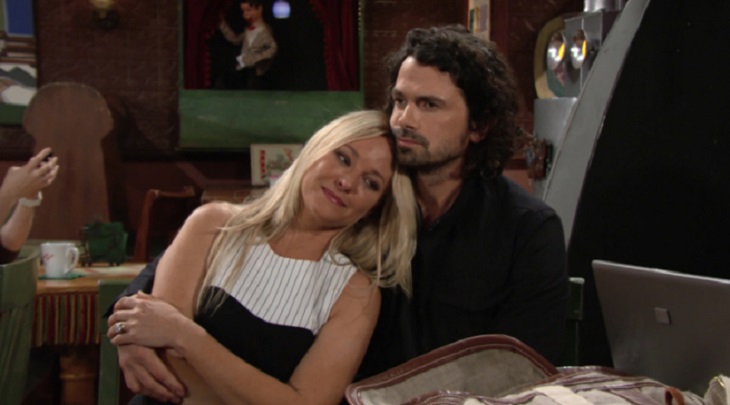 Sharon (Sharon Case) believed that Scott (Daniel Hall) was rock solid on ‘The Young and the Restless’. But she was shocked by what she and Paul (Doug Davidson) saw when he opened the door to the Roadside Storage unit where her significant other and Abby (Melissa Ordway) were trapped.

The fallout from the trafficking ring arc climax continues. ‘Shott’s’ end appears inevitable now that Scott and Abby crossed the line toward a relationship. As for Sharon, fans are wondering where she’ll be written to now.

Case’s character had long been portrayed as Genoa City’s most unstable leading lady. Devoted Sharon fans had been hoping for years that she would stop acting so kooky and return to the strong person she’d been in the 1990’s and early 2000’s.

Yes, Sharon had her ups and downs in days gone by. But the bizarre behavior she consistently exhibited after Cassie’s (Camryn Grimes) death more than a decade ago grew tiresome. It was repetitive and disrespectful to the character’s roots.

Hope was seen earlier this year after Dylan (Steve Burton) departed. Instead of Sharon falling apart, she quickly dealt with her problems and moved in multiple strong directions. She assumed ownership of her life by taking over Crimson Lights, enrolling in college classes, volunteering at a Crisis Center and most importantly, maintaining her mental health.

The Dylan-Scott swap was obvious, as Y&R wanted to pair Sharon with another man. Some fans were leery of that transition, as they wondered if it would eventually serve to pull Sharon under.

Scott has hardly become Sharon’s soul mate in less than a year. He’s basically someone she cares about, but doesn’t have a longterm history with. Hopefully that reality means executive producer and now-head writer Mal Young won’t write Sharon off-course as 2017 gets set to end next month.

One obvious implication, if Sharon and Scott do part, is a potential ‘Shick’ reunion. That development would be risky for Sharon and for Y&R’s writers. However, all soap fans know that solid writing can make everything work. With whatever Young’s choice, here’s hoping that Case is given meaningful scripts to perform indefinitely.

The Young And The Restless News: Sneak Peek Of Thad Luckinbill’s YR Return